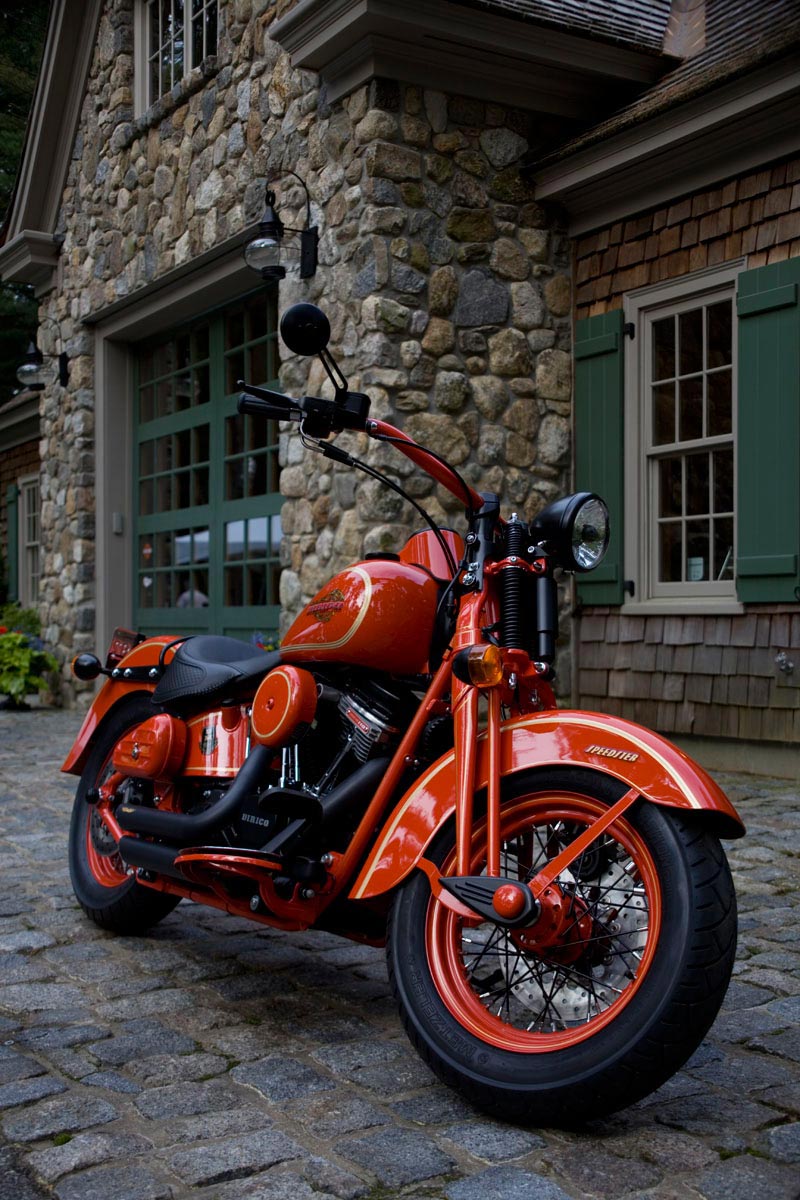 A couple of Dirico motorcycle in the assembly process. 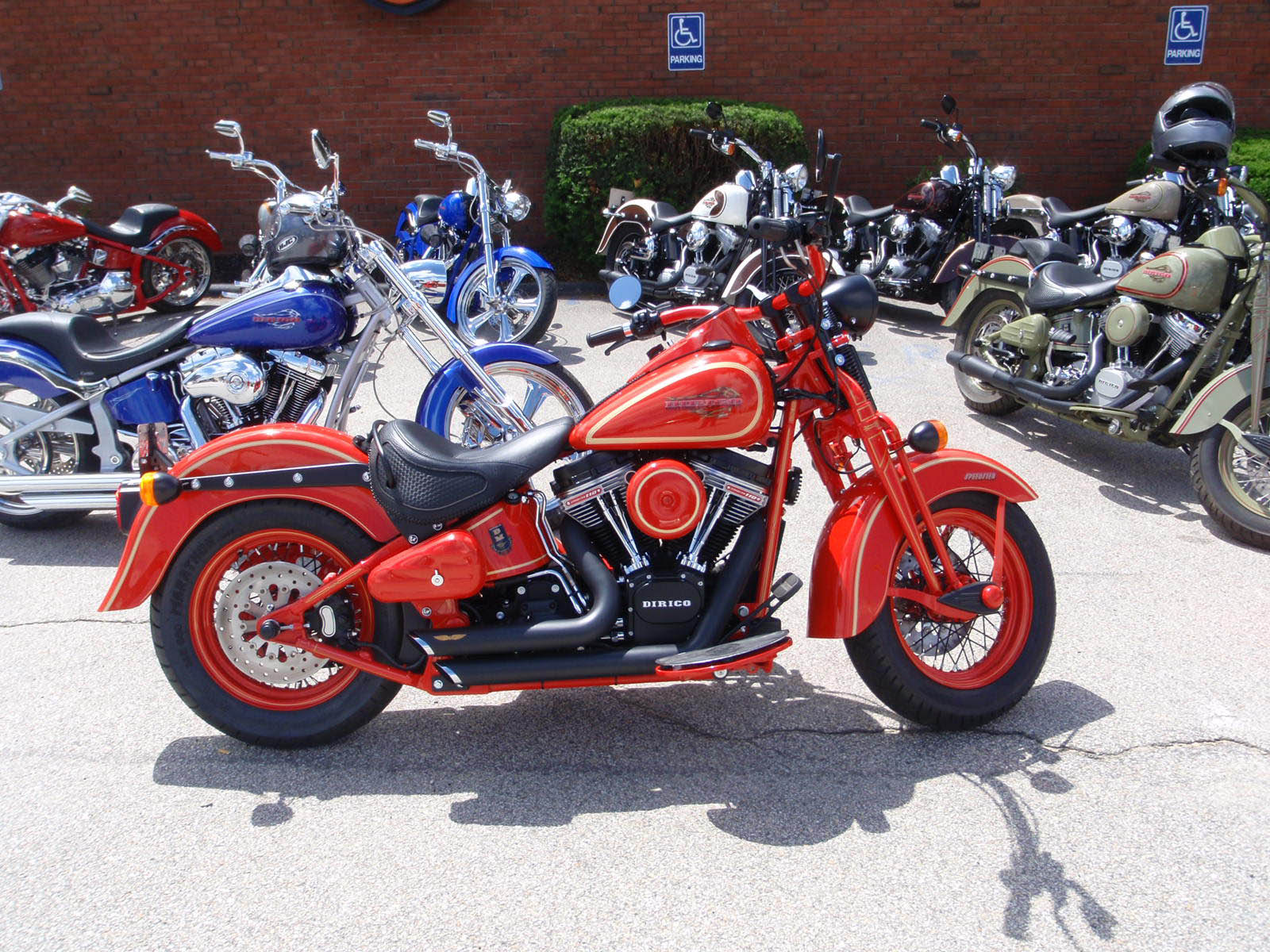 Steven Tyler autographs each Dirico motorcycle that leaves the facility.

Primary side of a Dirico Flyer.
Dirico Motorcycles
www.diricomotorcycles.com

It’s a pretty common thought amongst most people that you should never mix business with pleasure. But when you aren’t like most people, you can throw conventional thinking out the window and do as you will. Such is the case with three friends who turned into business partners with the inception of Dirico Motorcycles. Formed by inventor Mark Dirico (the company’s namesake), multiple New Hampshire Harley-Davidson dealership owner Stephen Talarico, and Aerosmith frontman Steven Tyler, these guys are an eclectic group of buddies who decided to take their love of motorcycles and turn it into a business.

We recently had the opportunity to head out east to Manchester, New Hampshire, to check out the bikes first hand. We started the trip with an informal get together with some of the other motorcycle journo’s at Mark Dirico’s house where we spent several hours hanging out in his “garage”. However, Mark’s garage is definitely not like our garage or many others we’ve been in for that matter. It’s more of an upscale workshop outfitted with everything necessary for him to design, build, and tweak the initial Dirico concepts before they go into production. With input on stylistic cues from Tyler and feedback from Talarico, once the group agrees with the looks and rideablity of a model, the assembly is shifted over to Talarico’s Manchester Harley-Davidson dealership where each bike is assembled by hand.

Currently, Dirico Motorclycles has three models to choose from all based on Softail style frames, the Flyer ($31,900), Speedster ($39,900), and Pro-Street ($38,900). The first two are retro-esque styled Springer models while the third bike is, well, aptly named. And with a slogan of “Engineered to ride. Built to last,” Dirico Motorcycles offer its customers reliability and peace of mind with Harley-Davidson Twin Cam engines in each of its models and a two year unlimited mile warranty.

Stylistically, the Pro-Street has everything you’d expect; a slightly stretched out and lowered stance and a narrow front tire followed up with a fat piece of 240mm Metzeler rubber out back. At the heart of the Pro-Street is a 103ci engine with a Screamin’ Eagle Heavy Breather Performance Air Cleaner kit, a Baker Right Side Drive six-speed transmission and a set of true-dual, staggered slash-cut pipes. The only stylistic element I didn’t like about the Pro-Street was the Deuce tank. Although it does go with the stretched look of the frame, I have never really been a fan of the lines of that tank. When it came to riding the Pro-Street I found it to be a very smooth bike with little vibration running up to the handlebars and footpegs. The 103 easily got the bike up to highway speed and beyond with plenty of power in all the gears to propel the bike around any slower moving traffic or at least traffic that insists on doing the speed limit. As expected the Baker transmission shifted through the gears like a knife through warm butter. With a decent amount of pullback in the handlebars and forward controls my hands and feet were in a comfortable riding position. On the downside, the contour of the scooped Corbin seat and minimal padding put a pressure point right in the lower center of my back, that quickly flamed up after a few short miles of riding. One of the shorter editors spent many miles on the bike and said he had no complaints about the seat, must be the way his shorter stature positioned him in the seat. And while it is a Pro-Street and not exactly a deep turn canyon carver, I found the lean angle on the bike to be pretty disappointing especially on the right side. The right-side-drive setup, pushed the pipes out further which caused me to quickly hit the tips in even mild turns.

If you are into classic styling the Speedster and Flyer might be right up your alley. Both models come with Fat Bob tanks, beefy fenders, spoked wheels, broad pullback handlebars, and half-moon floorboards. The primary difference between the models is the drivetrain. The Flyer has an 88ci engine backed by a H-D five-speed transmission, and a 2-into-1 collector style exhaust system. The Speedster is powered by one of H-D’s 110ci engines and delivers its power via a six-speed transmission and hydraulic clutch. Exhaust fumes from the Speedster are expelled through a set of Vance and Hines Side Shots.

Throwing a leg over the Flyer (there was only one Speedster available and one editor from a different magazine refused to get off it the entire day-but he’s a larger guy so he probably needed the extra ponies offered up by the 110 to keep up with the pack) I was immediately impressed with the ergonomics of the bike. The wide handlebars had enough pullback to put my arms in a relaxed position and in complete control from fork stop to fork stop. The floorboards provided plenty of space for me to shift my feet around and keep my lower body from going numb, and the positioning of the H-D Brawler saddle put my upper body in an almost perpendicular angle to the road but it was comfortable. Once again the power was smooth and even with the smaller displacement of the 88ci engine, the bike had decent acceleration. Obviously the Flyer had a much better lean angle and therefore was much more fun in the turns than the Pro-Street. What I did notice however was that when I took my hands off the bars the bike constantly wanted to drift to the right which was a little odd since it wasn’t a wide-tire bike, nor was it setup with a right side drive.

Riding through the backroads of New Hampshire we definitely got noticed, not just because we were a large pack of about 25 riders cruising through small towns on a lazy Tuesday afternoon, but because the bikes have great lines and striking appearances. The nostalgic styling of the Flyer and Speedster seemed to really catch people’s attention as these are bikes that most motorcycle enthusiasts and even non-enthusiasts can relate to.

While they aren’t planning on taking over the American V-Twin industry, the three friends and business partners, Dirico, Tyler, and Talarico are looking to build themselves a small niche in the V-twin market creating bikes which according to them, are clearly not for everyone, but designed to resonate with riders who want to be distinctive, not entirely different, and who appreciates a bike that matches their own ideas.

“The bike was back in the shop, and I didn’t want to give it back. I love this one-maybe because […]