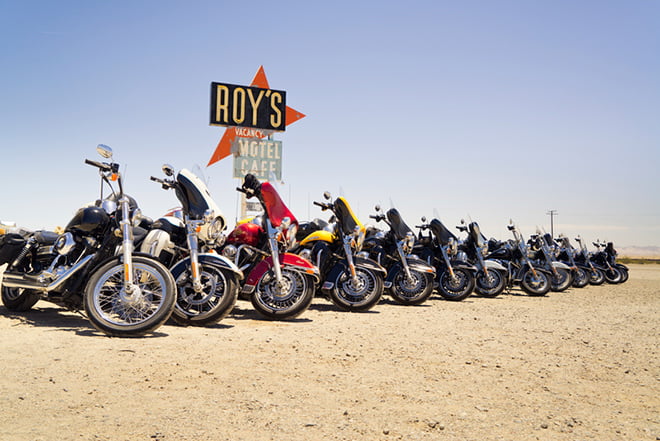 Just some of the EagleRider steeds in its rental stable.

EagleRider and Bartels’ Route 66, a motorcycle rental company based in Marina Del Rey, announced today that they have entered into a new business partnership. Effective October 1st, Bartels’ Route 66 will be re-branded to EagleRider Rentals and Tours.

“We are thrilled to have the Route 66 team join the Eaglerider family,” said Jeff Brown, co-founder and Chief Administrative Officer at Eaglerider. “For over 20 years we have admired their dedication, passion, and commitment to motorcycle travel. This is a great win for our business and elevates our presence in the Southern California market.”

As part of the enterprise agreement, the newly branded location will operate inside of Bartels’ existing Harley-Davidson dealership, which has been servicing the Southern California market for over 20 years and is also located in Marina del Rey. This move is a result of EagleRider’s alliance with Harley-Davidson, announced earlier this year.

Glenn Bartels, founder and owner of Bartels’ Route 66, will remain with the business as an EagleRider team member and will lead this newly established EagleRider location. Bartels will also work on key strategic initiatives for EagleRider as they continue to lead the world in motorcycle rentals, tourism and travel.

“EagleRider and Bartels’ Route 66 have each developed a strong reputation for providing great customer experiences and are dedicated to empowering travelers worldwide to live out their dreams of experiencing the country’s most storied roads, cities, and landmarks on a motorcycle,” said Glenn Bartels. “Joining Eaglerider is a great fit and natural evolution for Route 66.”