Home » Uncategorized » The Guts of a ProCharger Supercharger 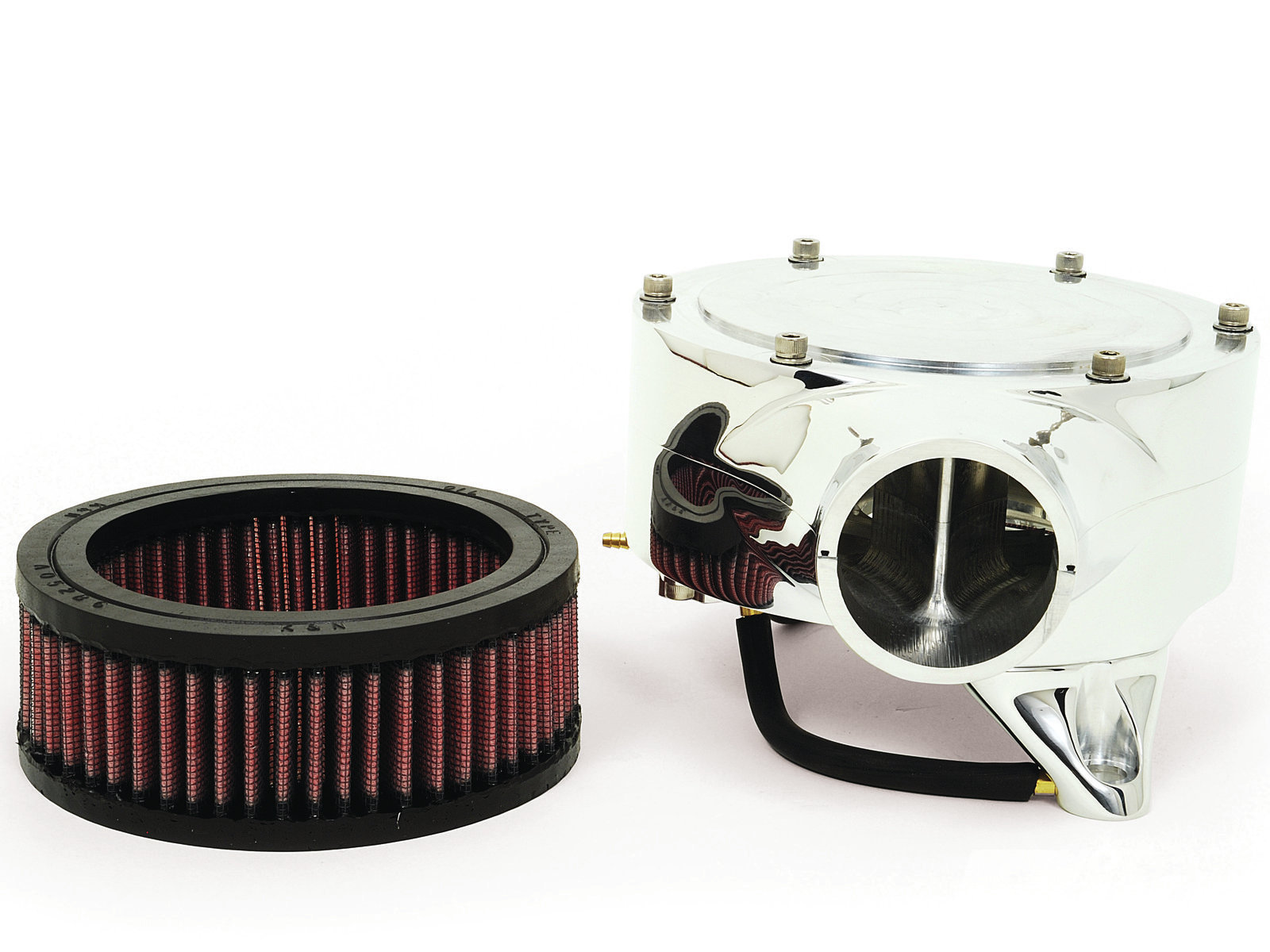 A genuine, high-flow, K&N; rechargeable air-filter element was included with the kit. Once air passes through the intercooler, it flows into the “bonnet” or air-cleaner cover. It may not look like much more than a typical air-cleaner cover from the outside, but then it’s hard to see the air-deflector located just inside the intake tube of the piece. The air deflector protects the air-filter from the high-speed incoming air (ever noticed the warning on re-useable cloth air-filters that warns the user against using compressed air to clean it?). The deflector allows air to quickly transition into the throttle body without bombarding the filter in just the intake area, spreading out the air so the entire filter is used. 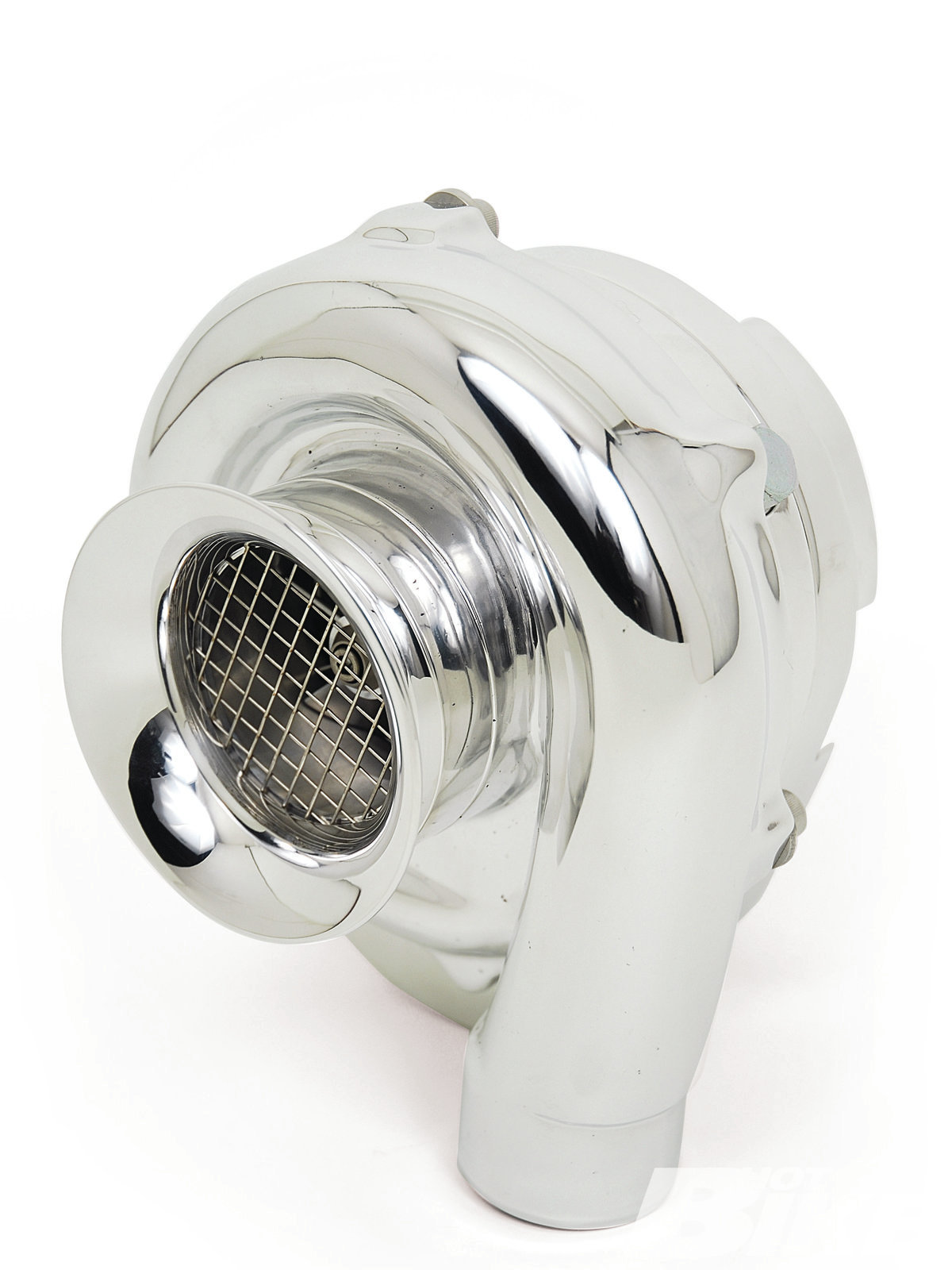 The ProCharger B-1 Supercharger in all its polished aluminum glory. The radiused intake, seen here, smoothes the flow of air into the mesh screen covering the billet impeller. The outlet tube (at the bottom of this photo) connects to the intercooler. 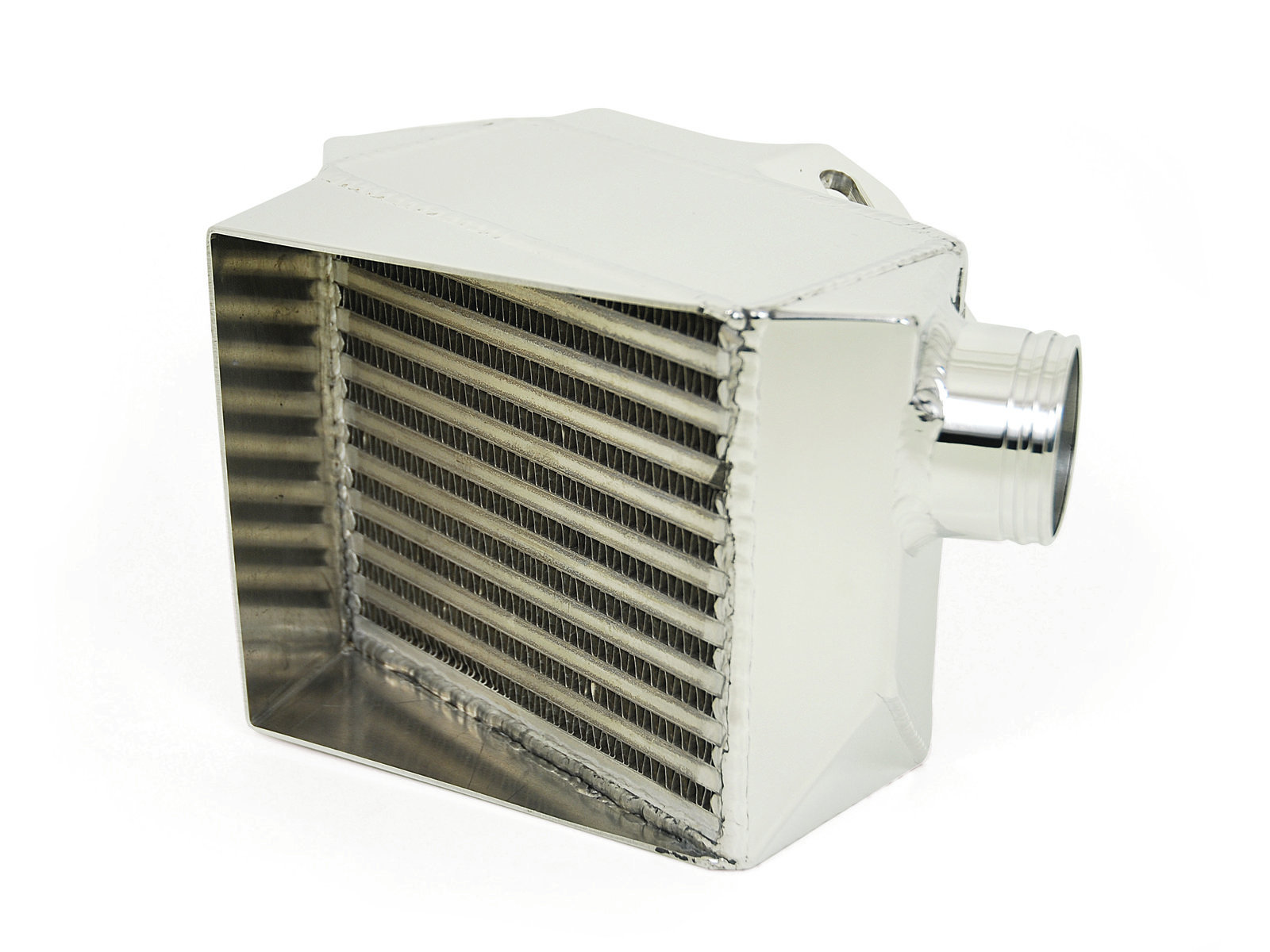 Any kind of air compression creates heat (check out the heat sinks on the air-compressor in any garage), which robs an engine of power. ProCharger has a variety of solutions in the form of intercooler options for American V-twins; this is ProCharger’s side-mount air-to-air intercooler. Basically acting as an air-to-air (meaning no liquids whatsoever) radiator, intercooling removes heat from the air charge, increasing the air/fuel density, therefore increasing power as well. 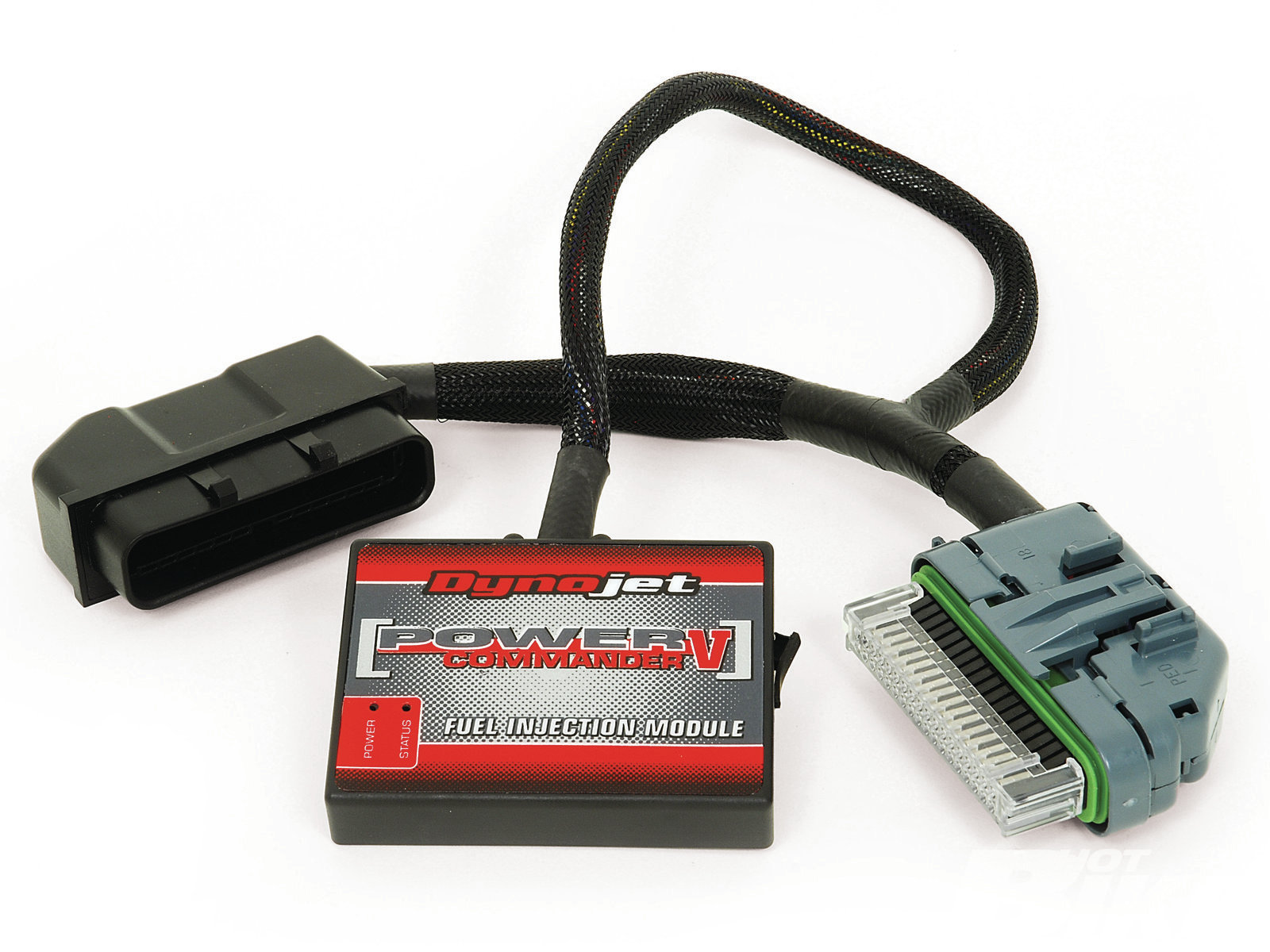 While timing may be left alone in most stock installations, there is a bit of adjustment necessary for the stock computer to deal with the huge increase of air into the system. The super-easy-to-install and simple-to-tune Power Commander 5 fuel injection module was also included with the kit. 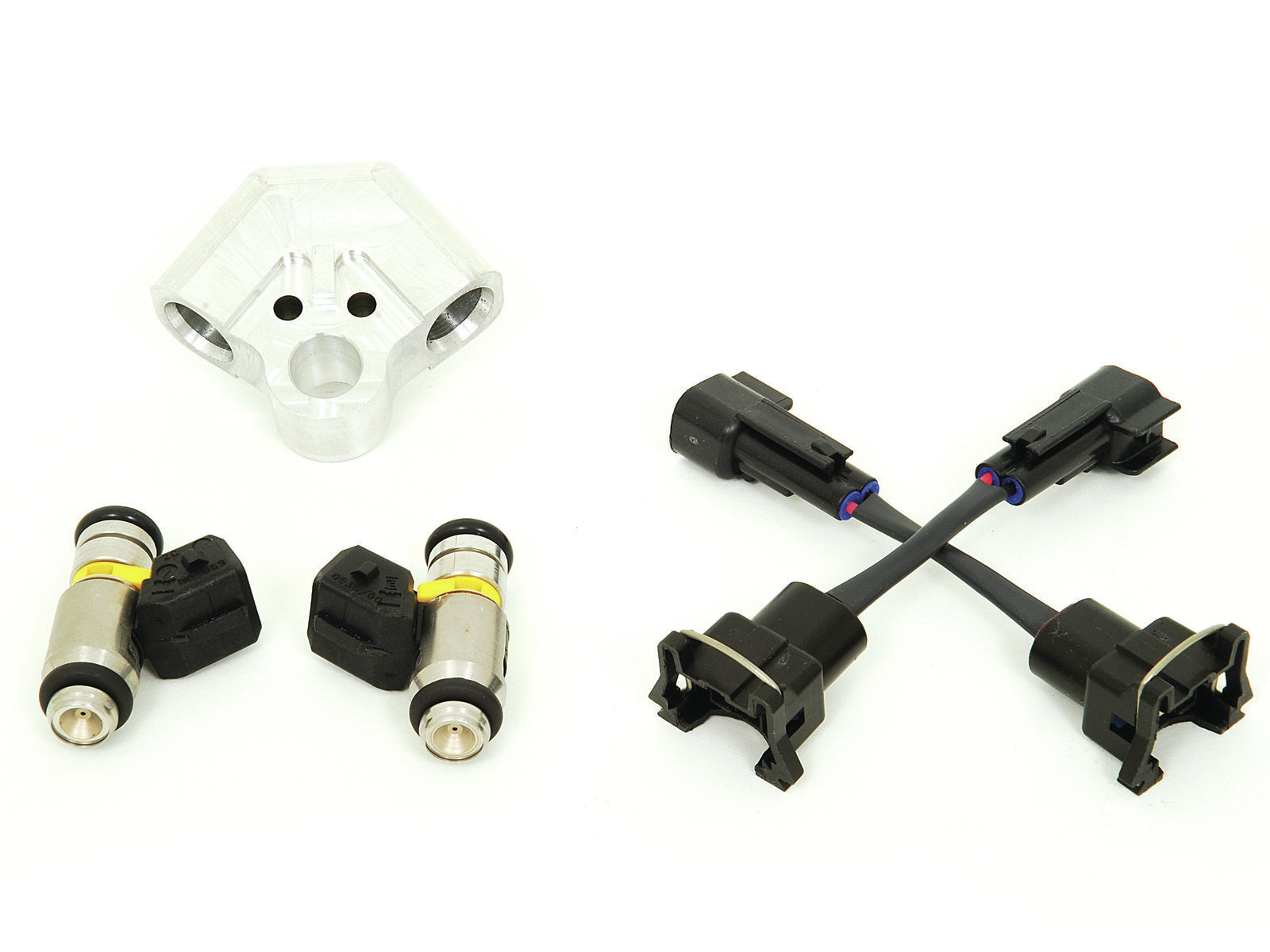 In order to compensate for the increase of air in the engine, more fuel is necessary as well. Larger, high-flow injectors and connectors are included to balance out the air-to-fuel ratio, further increasing the efficiency of the supercharger system. 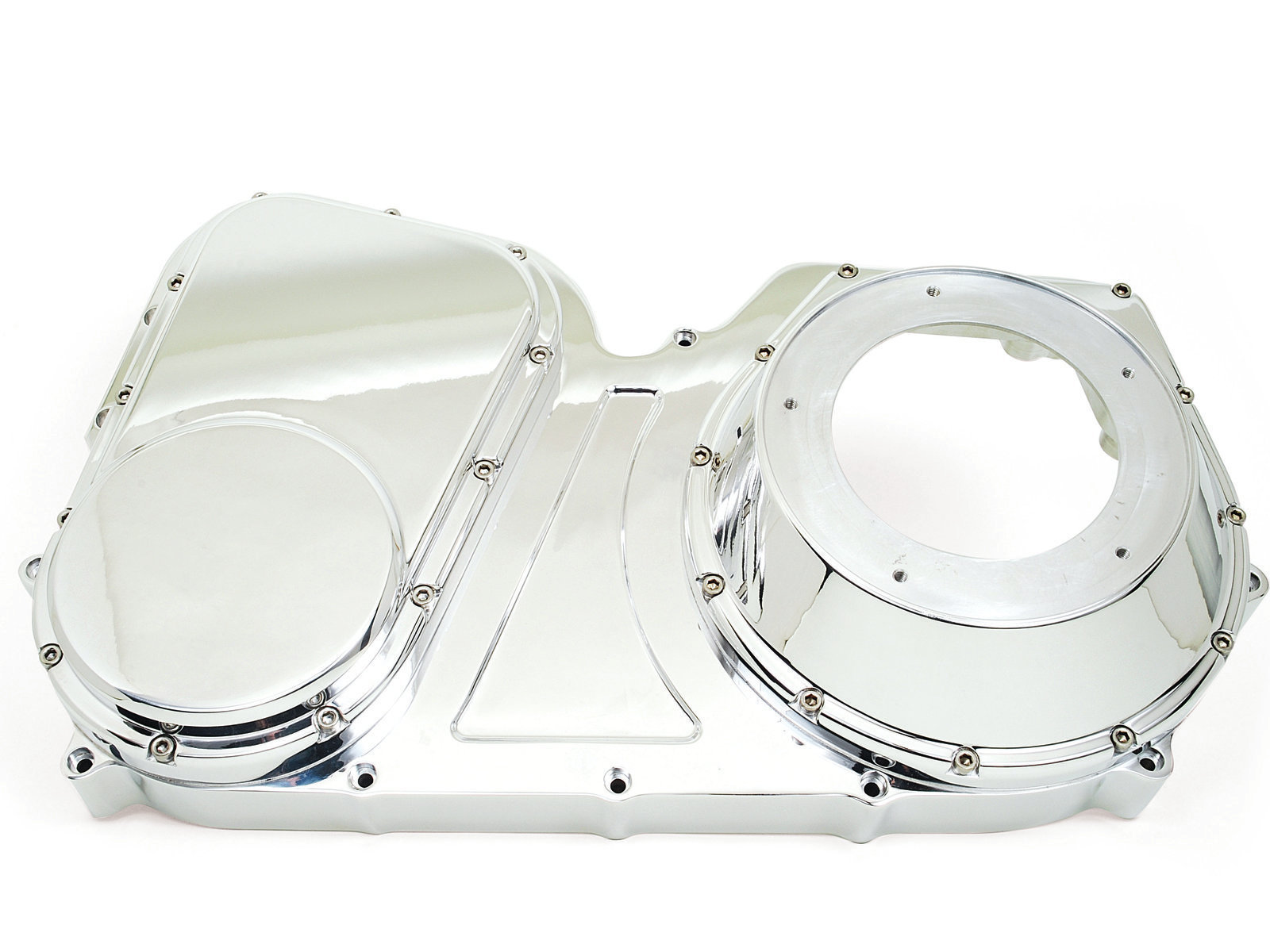 The outer primary is a polished aluminum, CNC masterpiece and most of it comes assembled from the factory. A substantial piece of the system; the outer primary houses much of the gears and pulleys driven by the crankshaft of the engine. The housing also acts as a protective cover for the rider, reducing the chances that a piece of clothing could be caught within the pulleys and belt. 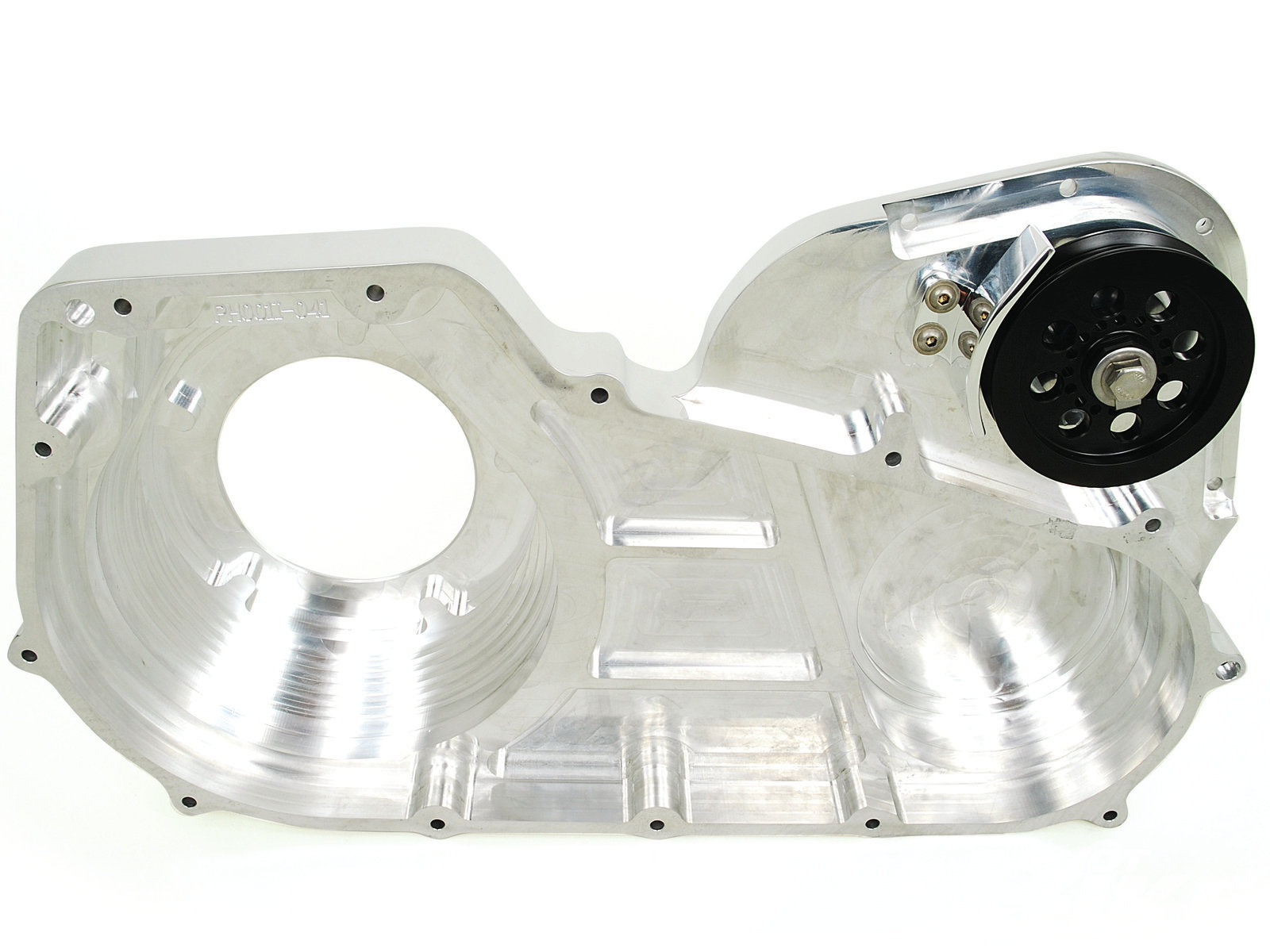 Not as smooth as the exterior, but then it’s not designed to be seen by most people, the inside of the outer primary cover resembles the steps of an Aztec pyramid and reveals the CNC paths hidden by the exterior’s professionally polished surface. Beautiful in its structural integrity and exceptional performance; note the pulley situated on a bracket that houses (and hides at this angle) the gear underneath that will mesh with another gear attached to the crankshaft. 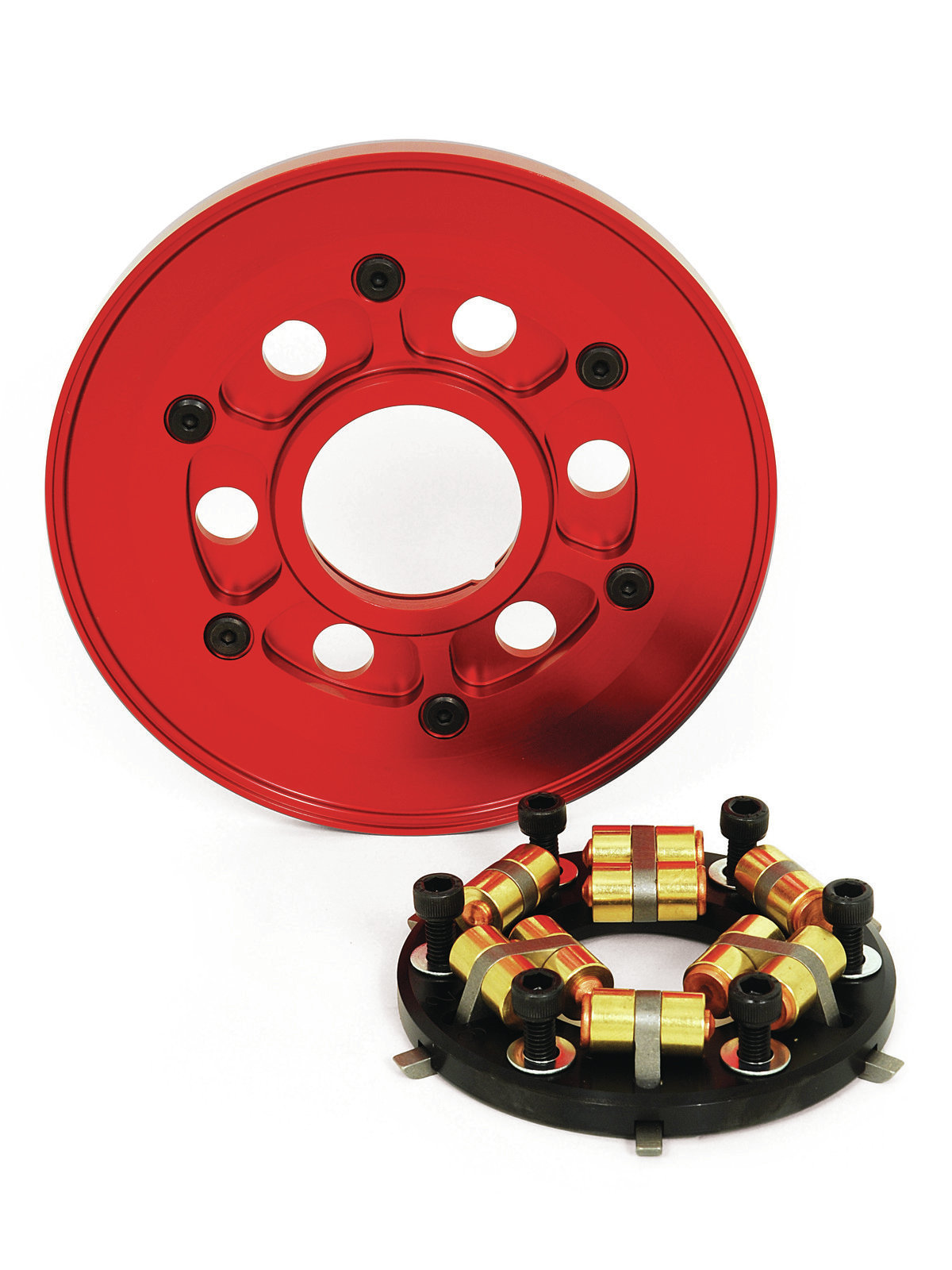 AIM Corp. was called on by ProCharger to provide a “lock-up clutch” that could utilize a stock H-D clutch. What it designed is what’s seen here: the VP-ProCharger Lock-Up kit that can handle more than 200 horsepower; and all the new power the engine is making is successfully transferred to the transmission. Next issue we’ll show you how the lock-up clutch works with the stock unit, plus the installation of the other supercharger components, and how it did on the dyno in part two of the Deep Breathing Dyna! 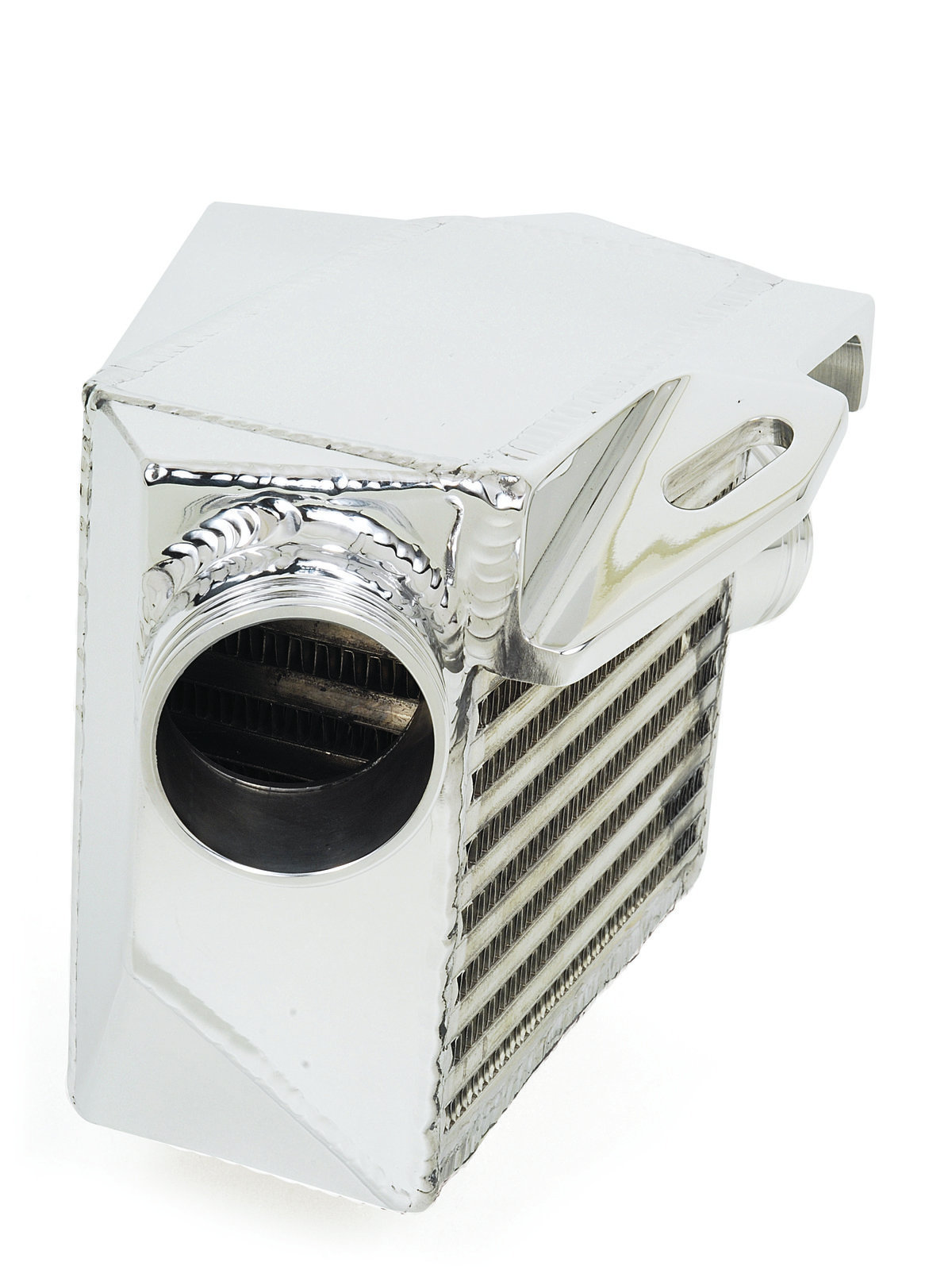 Viewed through the intake tube of the intercooler, the core of the intercooler is visible. It is vacuum operated so it only opens or closes. Under idle or light load condition (such as cruising down the freeway) the valve is held open by engine vacuum, bypassing boost. Once you stab the throttle, however, the valve closes and all the boost goes into the engine. This allows for the same or similar fuel mileage during normal cruising, good drivability, and no heat buildup. The amount of boost is dictated by the size of the supercharger pulley and engine rpm.

Generally speaking, in order to increase an engine’s output of power, the amount of air and fuel must increase. With the exception of V-Rods, Harleys have relatively low-revving power bands and all OE parts only have two valves per head. Meaning you can’t rev them much past 5,000 rpm and expect them to make more power by increasing rpm. Larger displacement will usually increase power, right? There’s even an old racer’s adage that claims there’s no substitute for larger volume, but what happens when you run out of room? Stock bores can be enlarged, and strokes can be lengthened, but only to a point. There are limits to the maximum size of an engine that will fit in a stock frame. Plus the costs continue to rise with ported heads, larger cylinders, longer rods, and wider pistons; it’s expensive to get close to the naturally-aspirated performance ceiling. Astronomical compression ratios add power, too, but won’t run on pump gas, and high-octane race gas is far more expensive (if you can find it) than the premium at the local fuel stop. Additionally, reliability issues start to develop and bottom ends need to be strengthened—all pitfalls that average speed-freaks want to avoid.

When larger displacement and more revs are no longer options for increasing power, power-adders, like nitrous, turbos, and superchargers, are the solution. All three examples will increase power, but in the case of beefing up a stock Harley, the supercharger is an excellent choice. Superchargers deliver great power across the entire power band; the power is “on-tap” and requires no lag time like a turbo; instead it features instant throttle response. And there’s no going to the store to buy refills of go-fast juice like with nitrous (or running out just when needed most).

How does a supercharger work? A normally aspirated engine pulls air into the combustion chamber with the downward stroke of the piston. Essentially, a centrifugal supercharger uses a crankshaft driven impeller to create a high-pressure system of compressed air that is pushed into the combustion chamber whenever an intake valve is opened, complementing » the vacuum created by the downward stroke of the piston. The compressed air requires additional fuel and the denser fuel/air charge makes a more powerful explosion when ignited, that is, versus a naturally aspired engine.

ProCharger’s Bolt-On kit claims at least 40-80 more horsepower. That statement alone is enough to get a performance junky’s blood flowing, yet it begs the question, “How is ProCharger’s system able to make claims that seem to be well beyond the reach of its competitors?” According to ProCharger, its centrifugal supercharger is able to produce so much more than other systems because of its integrated intercooling systems—simply put, ProCharger’s system is better able to use compressed air by cooling it off. Cooler air is more condensed than heated air, and therefore increases performance. By using cooler air, close to stock (or stock) timing is also retained, speeding up the installation process and leaving the installer with one less thing to do. »

Curious to see if ProCharger’s performance claims were true, a test of its kit was in order. Huntington Beach Hogs and Choppers in (you guessed it) Huntington Beach, California, happened to have a test mule ’11 Twin Cam 96ci Dyna it was willing to donate for the cause, and has performed a few supercharger installations in the past. HB Hogs also houses its own dyno for testing the results. Designed specifically for use on H-D Twin Cam EFI-equipped bikes, the ProCharger kit comes with everything needed to upgrade the bike and get it back on the road in about a day. Each kit includes the B-1 ProCharger supercharger (assembled), complete air-to-air intercooler system, supercharger bracket, outer primary cover, air-filter cover, belt tensioner, surge/bypass valve, computer programming module, air-filter, belts, hoses, gaskets, and hardware. Follow along as the major aspects of the ProCharger system are explained in this first installment. Next issue will cover tearing into the bike and dyno tests proving the power that was added! HB

Joe first ran all the wires to the point on the frame where the board would be mounted. If you’re […]

The Gunstock ski jump moonlights as a hill climb venue during its summer vacation. Laconia Bike Week Long a signature […]