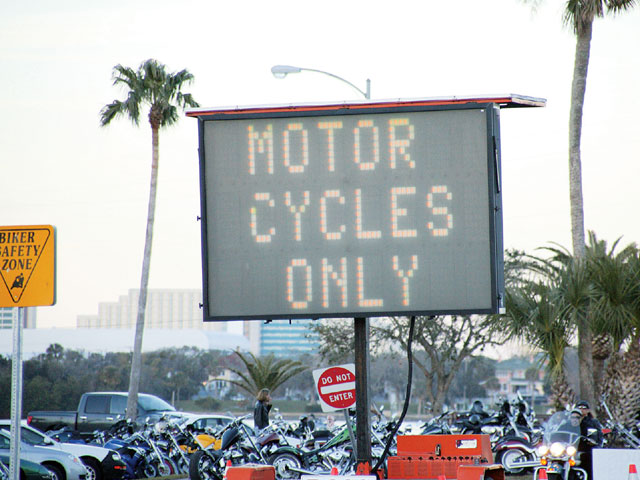 As I sit here in my office in sunny Southern California, it’s kind of hard for me to relate on a daily basis to the guys who have to ready their bikes for the long winter storage, only to pull them out in the spring to God knows what kind of weather awaiting them outside. Now, don’t get me wrong-I grew up in New England (Springfield, MA, to be exact), so I know what it’s like to have to deal with a nasty winter. The problem-if you want to call it that-is that it’s been more than 25 years since I lived there. At this point I’m so used to being able to ride every day that I have a hard time imagining what it would be like if I had to go months between rides.

The thought of a warm, sunny ride while you’re hunkered down in the mist of some late-winter whiteout conditions might be all there is to get excited about in the middle of winter. That whole concept is what makes this time of year and Daytona’s Bikeweek so special.

What began as a 200-mile motorcycle race back in 1937 has turned into something really special for a lot of us who ride motorcycles. Since its inception the event has changed dramatically, sometimes for the better, sometimes for the worse. Certain years visitors to the event have been embraced, while at other times they have been despised by the local community. Beginning in the late ’80s a major step was taken by local authorities, community leaders, and heads of some of the area’s businesses, where they made a concerted effort to welcome us into their communities. While not all the locals have been in agreement, the majority of them welcome us with open arms-and open cash registers.

It doesn’t take a financial analyst to figure out the locals want us there to boost their economy. As much as we would like to think they want us there for who we are, that is by no means the main reason. But at the same time it is a very important factor.

For the most part, people involved with V-Twins are really good people, salt of the earth-type folks who just want to go out and do their thing. The motorcycling community-the Harley community, to be exact-has been known for giving, and lots of it. Not a week goes by where you can’t find some sort of ride raising money for a good cause, with lots of guys and gals lined up ready to help out.

It’s that kind of behavior that makes us welcome in most places, by most people. Whenever I’m at an event, I talk to local business people, as well as law enforcement personnel, and what I hear over and over again is how well-behaved this crowd is when compared to most others. Yeah, sure, we like to blow off some steam now and then, but for the most part the vast majority of us are respectful of our hosts. While there will always be a few in every crowd who get carried away, I like to believe that we know where the boundaries are and don’t push them too far. We show up, have a good time, spend some money, and then go on our way.

So when you and your pals are running around enjoying the warm sun and everything else Florida has to offer, just remember that we’re guests, and we want to be invited back-real soon.Be wellSteve

MSRP is $49.95 Courtesy of DEI With fresh styling and low seat height, the new Indian Scout has quickly become […]

If it is DOT then show it. How do you know if your high dollar helmet is DOT well the […]

5 Favorite Things About the 2018 Indian Springfield

The Indian Springfield has been flexing its muscle in the cruiser domain since its debut in 2016. While tassels and […]