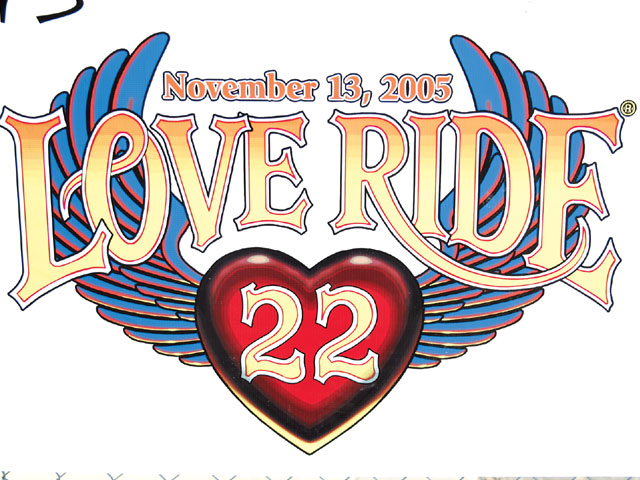 When it comes to charity, bikers have to be some of the most giving folks anywhere in the country. It makes no difference where you go across the continent-just let a bunch of motorcyclists know there is going to be a ride somewhere to help out someone less fortunate, and they’ll be willing to shell out some cash, a donation, or their time just to have the opportunity go ride with a bunch of other like-minded people.

Most weekends you can find a charity ride to attend. The beneficiary may be a children’s center, a blood drive for an injured rider, or perhaps one for a veterans’ or law-enforcement organization-whatever the cause, people line up in droves just to be involved.

Each year there are countless rides that take place, but few can compare in size and scope to the one in Southern California that’s presented by Harley-Davidson of Glendale and is more commonly known as Love Ride, or Florida’s Christmas Toys in the Sun Run. The rides take place each year in November and December, respectively.

Love RideWhat began in 1981 as an event called the Biker Carnival has grown into something pretty amazing. Oliver Shokouh, owner of Harley-Davidson of Glendale, has presided over the past 22 events and, by all accounts, is the driving force behind the huge fundraiser. The major beneficiary of Love Ride is the Muscular Dystrophy Association (MDA), along with the Hurricane Katrina Relief Fund, Reading By Nine, and 22 other local and national organizations.

Beginning in the early hours of Sunday, November 13, 2005, motorcycles began rolling into the area surrounding Harley-Davidson of Glendale. By the time 9:15 a.m. came around, there were 14,000 motorcycles involved, all of whose riders paid at least $55 for the privilege of taking place in the ride. With the monies tallied up, the receipts of the one-day event totaled a whopping $1.4 million.

Around the blocked-off streets surrounding the dealership, thousand of riders listened to speeches bellowing from a P.A. system from the small stage. There were major and minor luminaries lined up ready to speak to the crowd, but when it came down to it all anyone wanted to do was fire up their bikes and begin the 35-mile trip up the 5 freeway to Lake Castaic. By the time the throngs of bikers arrived, the recreation area began to fill up quickly. Once there, attendees had multiple choices of how to spend their time, including rows and rows of vendors displaying everything from 100K custom bikes to T-shirts and everything in between. Included in the price of the ride were a barbecue lunch and a concert, with the headliner being none other than B.B. King. The 81-year-old virtuoso moved the crowd with his trademark blues riffs and unique phrasing. To find out more about the event, log on to www.loveride.org.

Christmas Toys in the Sun RunNot to be outdone by the West Coast, the motorcycle community of South Florida has been pulling together with its own style of charity event for the past 18 years. This year’s ride took place on December, 4, 2005, and was sponsored in part by Bruce Rossmeyer’s Harley-Davidson, Rick Case Honda, Miami-area Harley dealers, and the Seminole tribe of Florida (these are the folks behind the Seminole Hard Rock Roadhouse Tour).

We were on the ride ourselves, and while it’s hard to judge just how big a particular crowd is, we can tell you there were a whole lot of people tooling down the road with us. We checked back after the ride was over and were told by the organizers that there were around 50,000 riders taking part.

In addition to the Sunday ride, there were multiple fundraisers taking place over the entire weekend, all with one thought in mind-to help out the area’s kids. The major recipient of all this goodwill was the Joe DiMaggio Children’s Hospital of Hollywood, FL, while the Boys and Girls Clubs of Broward County also felt the kindness of all the riders. All told, the ride collected $550,000 and a whole lot of toys-not bad when you consider it cost just $10 and one toy to participate.

One thing that makes this ride special is the fact that the whole ride is police-escorted, and the entire route is closed down to other vehicle traffic. Imagine 275 law enforcement officers lining 25 miles of highway between the Pompano Harness Track and Markham Park for the sole purpose of making sure everything goes smoothly. There’s something pretty cool about being on the highway with nothing but bikes as far as the eye can see.

The stretch of highway was closed down starting at 10 a.m. and was not reopened until 1 p.m., much to the dismay of many Miami Dolphins fans, who had to find alternative routes to get to the stadium’s 1 p.m. kickoff. Now that’s impressive!

Once riders arrived at Markham Park, they were treated to a plethora of different food choices as the aromas of ethnic foods filled the air. There was a judged bike show, lots of vendors, and music lasting all day long. Gear up for next year’s event by checking out www.toysinthesunrun.com or calling (954) 430-9697.

Born-Free 4 is already this Saturday! We hope all is well and you guys are excited about the show, it […]