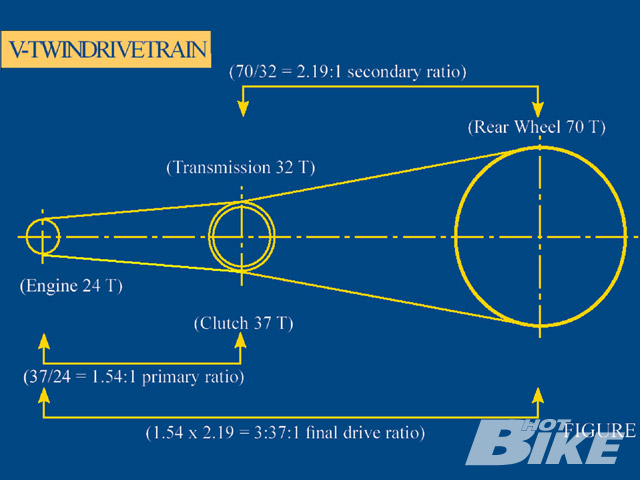 1. The V-twin drivetrain includes the primary drive, transmission and secondary drive. The entire drivetrain is designed to transmit power from the engine to the rear wheel while providing gear reduction to keep the engine in its optimum power band. 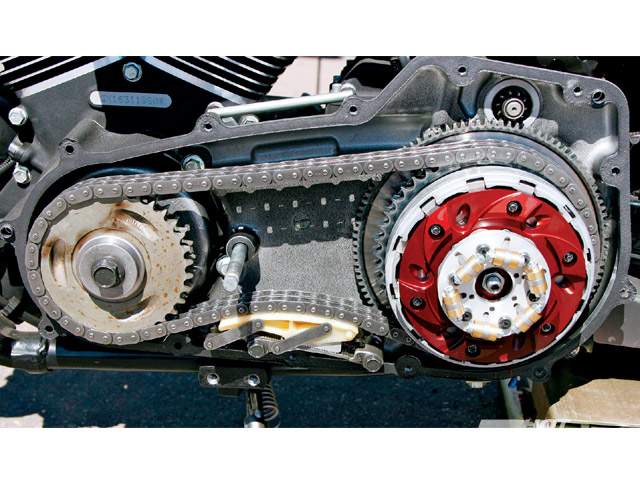 2. The primary drive consists of an engine output sprocket (attached to the crankshaft), clutch assembly, roller chain (or belt) and usually a housing that encloses the entire assembly. The purpose of the clutch is to engage the primary drive to the transmission. 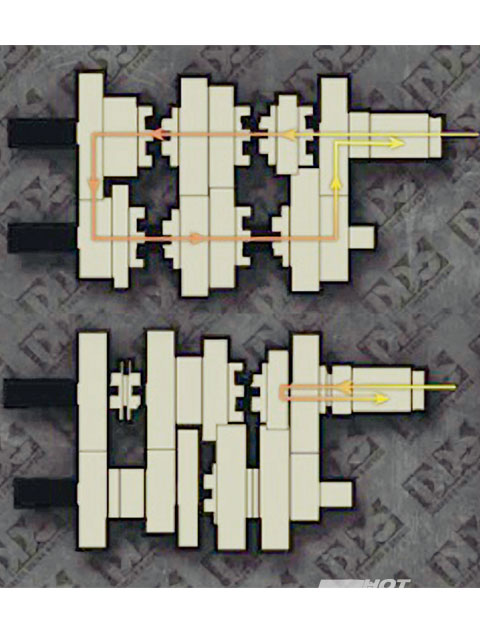 With the abundance of performance options for the V-twin, it is easy to spend a small fortune on building a stout engine. Unfortunately, drivetrain gearing is often overlooked when making performance modifications, but it is crucial if your bike is to perform well during stop-and-go riding and highway jamming. Understanding a few basic principles about your bike’s drivetrain will help get the engine’s power to the ground where it really counts and will make stop-and-go riding or occasional bursts down the road more enjoyable.

The function of the drivetrain is primarily two-fold: transmit power from the engine to the rear wheel and to provide gear reduction. Gear reduction is a method for multiplying engine torque. That is important because it takes more torque to get a bike moving from a standing start than it does to keep it going once it is moving. For example, to get moving from a standing start, early model Harleys had to be pedaled because they had little gear reduction (due to a lack of a transmission) to multiply engine torque. With gear reduction, rotating the crankshaft three times for every one rotation of the rear wheel provides greater torque and acceleration than rotating the crank two times for every revolution of the rear wheel.

Primary Drive RatioThe primary drive ratio is determined by dividing the number of teeth on the clutch sprocket or pulley (output revolutions) by the number of teeth on the engine sprocket or pulley (input revolutions). For example, if we assume a Big Twin has a 37-tooth clutch sprocket and a 24-tooth engine sprocket, that results in a 1.54:1 primary drive ratio (37 divided by 24 equals 1.54).

Secondary Drive Ratio
In order to calculate the secondary drive ratio, you divide the number of teeth on the rear wheel sprocket or pulley (output revolutions) by the number of teeth on the transmission sprocket or pulley (input revolutions). Some Big Twins have a 70-tooth rear wheel pulley and a 32-tooth transmission pulley. Dividing 70 by 32 results in a 2.19:1 ratio.

Final Drive Ratio
Multiplying the primary ratio by the secondary ratio yields the final drive ratio, which is a term commonly provided in specification charts. By multiplying 1.54 by 2.19, we end up with a 3.37:1 final drive ratio. To keep things simple, the transmission’s internal ratio was not factored in, but the high gear internal transmission ratio for most Harley models (without overdrive) is 1:1. This means that the transmission’s input shaft is turning at the same speed as its output shaft, therefore all gear reduction is done at the primary or secondary drives.

When changing gear ratios, everything works on a sliding scale — when you gain on one side, you lose on the other. In general, if you change gearing to improve acceleration, high-rpm performance can suffer. On the other hand, increasing top-end performance often hurts acceleration. The trick is to end up with a happy balance between the two because there is no such thing as a free lunch. To select the proper gearing, you need to set your priorities based on the type of riding you do and your engine combination. In other words, gearing should be selected based on the total application: engine combo and riding style.

Examples
If you do mostly highway riding, you would generally be better off with a higher final drive ratio (lower numerically) because that would require less rpm for a given mph, resulting in more top speed and typically less engine vibration on those long-distance trips. Of course, the tradeoff would be slower acceleration. On the other hand, for maximum acceleration, a lower final drive ratio (higher numerically) would be in order, but the result will be less speed for a given rpm.

Let’s calculate a few gearing examples. If you want to calculate accurate ratios for your specific model of V-twin, just replace the numbers used below with values specified in your service manual or sales brochure. For example, let’s assume a bike has a 2.03:1 secondary ratio, which is the result of a 65-tooth rear wheel pulley and a 32-tooth transmission pulley (65 divided by 32 = 2.03). By changing to a larger 70-tooth rear wheel pulley, which is found on many models, the bike’s secondary ratio would change to 2.19:1 (70 divided by 32 = 2.19:1), giving a 3.15:1 final drive ratio (1.44 x 2.19 = 3.15). With a 3.15:1 final drive ratio, the bike would have quicker acceleration, but less mph for a given rpm, which could make long distance riding more taxing due to the engine’s higher rpm at highway speeds.

What About Overdrive Transmissions?
You have probably found yourself wishing for another gear while cruising on the freeways. Raising your bike’s final drive gearing (lower numerically) would reduce engine rpm and have the effect of adding a higher gear, but it would also render all lower gears equally higher, thus reducing acceleration and making passing on hills when fully loaded more difficult. This is where an overdrive (OD) gear helps out because an overdrive gear (for example, an OD Sixth gear) would not render all lower gears equally higher, which means the bike would maintain normal acceleration while high-speed rpm would be reduced.

So, what benefits would a 2.71 final drive gearing offer when cruising down the highway? Depending on the year and model of your Big Twin, the engine is typically turning between 3,000 and 3,500 rpm at highway speeds. If we assume the engine is turning 3,200 rpm at highway cruise with a 5-speed 1:1 ratio non-overdrive transmission, installing an 0.86:1 ratio overdrive reduces engine rpm by 14 percent, resulting in a reduction of 448 rpm or 2,752 rpm at cruise speed. That is a significant reduction in rpm. It not only results in happier cruising and reduced vibration but also reduces engine wear while increasing fuel economy. And don’t forget, the ratios for gears 1-5 are not affected, so acceleration in those gears is not reduced.

Nevertheless, there is no free lunch with an OD transmission because there is a penalty to pay for the OD design. Here’s why. The reason that transmissions are designed with a direct drive high gear (1:1 ratio) instead of an overdrive is because a 1:1 ratio is most efficient while an OD trans suffers some power loss. With direct drive, there are no gear reductions between the transmission’s main and counter shafts, resulting in less power loss and reduced noise. As such, the input shaft and drive gear are locked together, so power enters on the input shaft and leaves immediately on the drive gear. However, with an overdrive trans (where top gear has less than a 1:1 ratio), power flows through gear sets on both the main and counter shafts, reducing power by up to 8 percent while increasing noise.

Concluding Thoughts
For most highway riding with a 5-speed, a 2.92 to 3.15 final drive ratio (assuming a non-overdrive tranny) works well because less rpm is required for a given mph. Where your priorities dictate a combination of highway riding and acceleration, a 3.37 final drive ratio (non-overdrive trans) offers a good compromise. With a 6-speed transmission (either direct drive or overdrive), top gear will be 11-20 percent higher (lower numerically) for reduced rpm. And for maximum acceleration, a Big Twin generally requires a final drive ratio between 3.70 and 4.15, but that would result in poor highway performance and additional wear because it would require extremely high engine rpm.

Table 1 Listed are the drive ratios for an early model Twin Cam 5-speed. Note that Fifth gear has a 1:1 internal ratio, which means that the engine’s crankshaft turns one revolution for each revolution of the rear wheel. Now, refer to Table 2.

Table 2 On the left side are Twin Cam 6-speed direct drive ratios. Notice that top gear, Sixth, has an internal ratio of 1:1, which means that the engine’s crankshaft turns one revolution for each revolution of the rear wheel. On the right side are listed the ratios for a SE 6-speed overdrive transmission. Notice that its top gear, Sixth, has an internal ratio of 0.89 while gears first-fifth mimic the 5-speed ratios listed in Table 1. This means that the rear wheel is overdriven by 11 percent. In other words, the engine is turning only 89 percent of the rear wheel revolutions. Or, one could say that the rear wheel is turning 11 percent faster than the crankshaft. An engine is most efficient at a 1:1 ratio, so overdriving the rear wheel reduces efficiency. And that is one benefit of a direct drive 6-speed over an overdrive 6-speed. A second benefit of a direct drive is that gears First through Fifth can be bunched closer together, making the gearbox more of a close-ratio box, which can result in less rpm drop during up-shifts.

Burning questions in need of answers