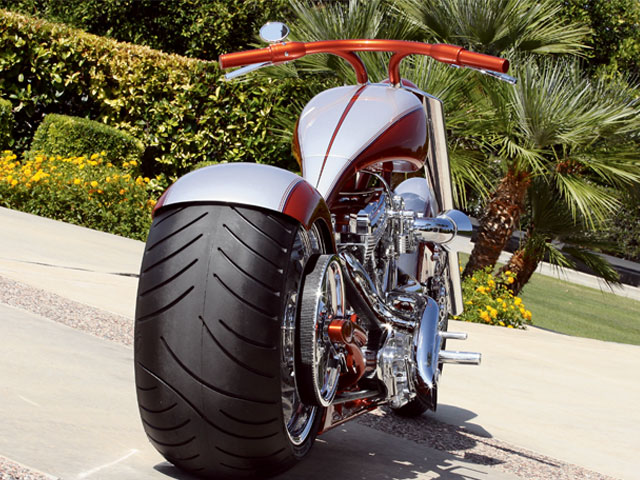 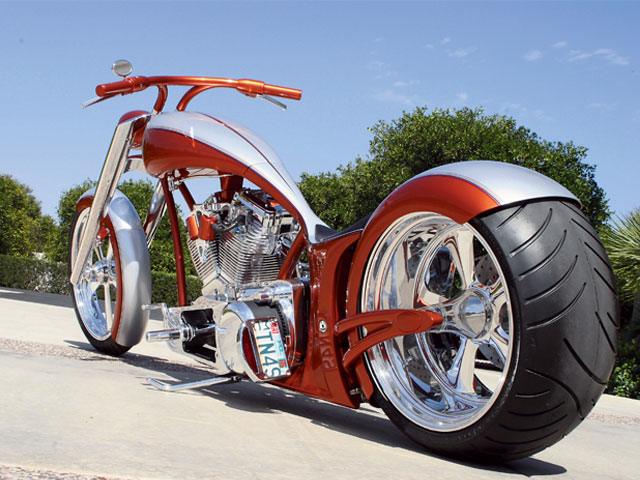 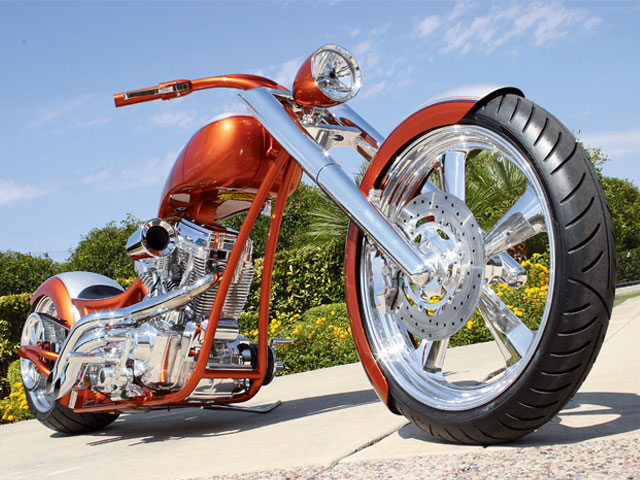 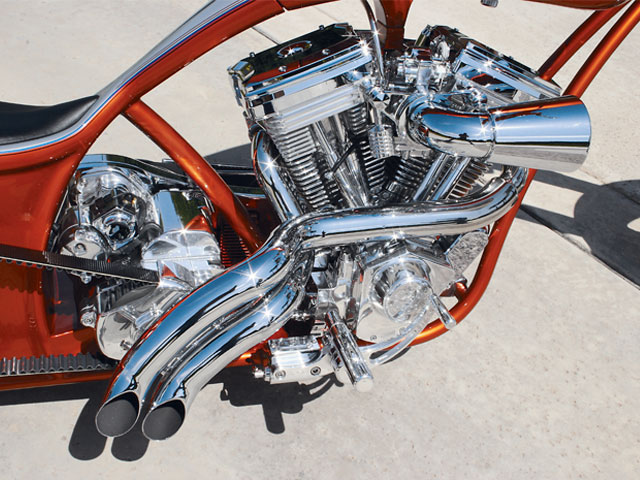 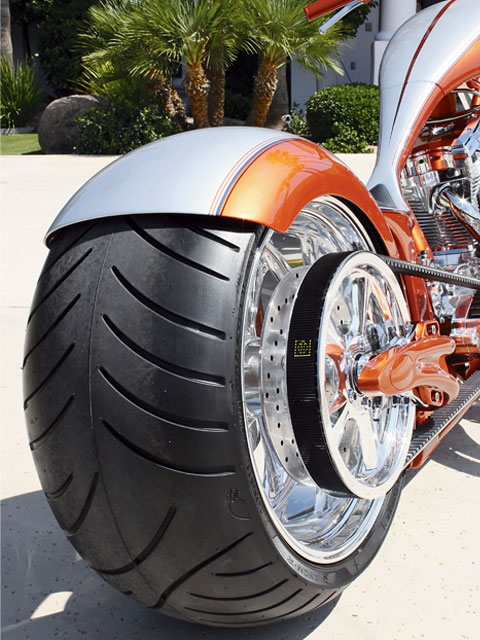 Car guys have it right. They understand swoop, they understand flow, and they understand lines. They also have a lot of tin to work with, as well as nice big canvases to make their own styling statements. Bikes don’t generally afford the builder the luxury of working in terms of square footage; rather, it is all-and we do mean all-in the details, in the realm of the micro-inch, for better or (as is the case most of the time) for worse. Car guys in general (easy there, you exceptions) don’t get bikes.

The little details can make a bike a big winner visually as well as functionally. If they aren’t carefully attended to and addressed, they can make a bike appear as if it were a jumbled carcass of random parts from the builder’s favorite parts catalog. Anyone who has bought a part he thought would look great for his bike, only to discover it didn’t look quite as good as the mind’s eye envisioned it, would know this. Tying it all together should be a primary concern to the moto-stylist, and the man who built this machine has nailed the details dead to rights with this low-slung ride. This bike does not feature hanging clutch cables, misaligned fenders, and plasti-chrome sticky tape covers; this bike is done right: clean and tight.

Enter the king of clean: Tom Kegler of Class Act Customs, located in scenic, and serene Mesa, AZ. Tom is actually a car guy, and this was his very first ground-up motorcycle build. Just a glance at this bike makes us only guess the caliber of cars that must come out of his and his partner, Scott Irvine’s, temple of a shop. Tom had the itch to apply some of his 20-plus years of automotive painting and metal fabrication to motorcycles (due in large part to their current popularity), and what better bikes to work with than V-Twins? Tom saw the aftermarket as chock-full of accessible, well-made, and designed parts-or, as he would say, “items to start with,” because, as you can see, nearly every part of this bike has been massaged, tweaked, and fit to appear as a seamless, clean, and simple piece of two-wheeled functional “get on and go” art.

One must step back and appreciate the man himself for a moment before we dig into the juicy bits this bike serves up. Tom seems like a pretty low-key fellow at first, reluctant to toot his own horn. Refreshingly, Tom does not call himself a biker; no, his interests are strictly in building these types of well-made bikes. His only intention is to provide these fun machines for the use of others.

Tom had a distinct philosophy when it came to selecting parts for this project. He asked, “Why would I work from scratch when the parts available in the aftermarket are technologically advanced in design, made from superior materials, and readily available?” Not only does this philosophy allow a bike to be made more quickly due to the fact that you’ve got starting points to work from, but, as is the case in most instances, the manufacturers have done the R&D; and know that the part is up to the rigors of motorcycle use. The parts for this build took five months to collect-not bad when you consider how hard it is to find the fit and finish you want off a printed page. Achieving this sort of goal is hard enough for the seasoned builder, but a first-time builder, new to bikes? All we can say is “wow.”

The foundation for this super-sano build is an Independent LowLife frame with 45 degrees of rake. The LowLife has an unmistakable profile, with a beautiful arched top tube that has been accentuated even more by some Class Act Customs tweaking-as in adding an additional 7 inches of stretch to the backbone of this already long machine. This wide-open frame allows the builder to really showcase his mechanical bits in a dramatic way. The frame needed a bit of attention to meet the shop’s rigorous standards. Specifically, the top motor mount needed to be fabricated, but, more than that, it needed to be designed to flow and look as if it were supposed to be there, and not appear simply as a brackety lump o’ steel. Then this seemingly simple piece needed to match the lines and flow of the bottom of the tank. Easy, right?

The custom gas tank that Tom ordered from a custom manufacturer wound up not quite working as planned, so that already custom piece needed to be yet further customized by Tom to get the fit and finish he required. In the end, Tom wished he had just made the tank himself; it would have been easier. Let your eye wander over the smooth, sexy rear section with the swingarm-mounted Fat Katz fender, flowing swingarm, and boxed-in rear section. The boxed-in area not only provides additional strength, but it’s also a great spot to hide all the necessary details-such as a battery to start the billet heart of this smoothie. It is this type of work that is the sign of a pro, both in design and fabrication; in a word, it is seamless. Look at the flow from rear meat to gas tank-there are sensuous lines aplenty.

Notice any wires? See any danglers? Well, you’ll see barely a hint of visual crapola such as wires, clamps, hoses, and other “ick,” because the clean-up man spent the time to nip and tuck and weasel all those nasty parts out of sight. We cringe at the effort Tom spent at thinking this stuff through and then getting it accomplished.

Being hot rod-influenced, the bike had to go as well as flow, and motivation is provided by a top-shelf drivetrain assembled from the best the aftermarket has to offer. A 113-inch Patrick Racing engine straight out of the box was exactly what Tom wanted with no need to tweak further, other than adding a snazzy, subdued Wimmer intake unit for inhalation duties. A bright-polished engine serves to continue the super-clean appearance, looking not unlike a diamond in a beautiful setting.

Tom considered all the options on how best to deliver the power of the crate Patrick Engine. His plan was to again go with all name-brand, blue-chip, proven, and available products. Following the plan meant transmitting power to the ground courtesy of a Baker RSD six-speed transmission. Little can be said anew of this top-shelf rock box, other than it works as advertised with no drama-and it looks smokin’, too. The transmission case is billet, and of course it is polished. A beauty of an Independent Cycle exposed-beltdrive primary not only helps keep your pants length in check, it’s especially stout with its Rivera clutch for those times when Tom needs to check peak motor output in the field. A breath of fresh air, the bike is set up with mid-controls for handling and comfort.

To appease the law and point the way home, a Headwinds headlight was added to the list of parts needed to finish off this beauty. When it came time to spec the frontend suspension, there was really no choice in Tom’s mind other than to go with a Goldammer unit. This gorgeous piece needed no tweaking, but it was ordered 6 inches over spec. It’s amazing that parts from so many manufacturers could all work so well in concert.

A modified Fat Katz front fender wraps the Xtreme Machine front wheel almost as tightly as does the Avon tire. Look at that modified Fat Katz rear fender, held in place by a modified independent swingarm, and how cleanly it wraps the Xtreme wheel. Another look at the area where the rear tire/frame/primary comes together confirms this bike was built by a professional—. The last juicy bit is the absolutely beautiful paint job, done up in a resplendent House of Kolor Cinnamon and Silver White Pearl paint-sprayed by none other than the builder himself. The pinstriping is about as tasty as one could imagine-in a word, flawless.

Smooth, tight, clean, and right-that’s the game at Class Act Customs. We can’t wait to see the next creation rolling out of this shop; we understand that it might have an in-house-built frame and some other Class Act touches. Stay tuned.

Editors Note: Every once in awhile we come across a bike a bit different and may not be what you […]

MEDINA, MN (July 15, 2010) – Victory Motorcycles is proud to return as an official sponsor of the Legendary Buffalo […]

Tech Victory’s 8-Ball Gets the Hot Bike Treatment Skill Level: Moderate If you haven’t noticed the current trend happening with […]

Harley-Davidson Cruise Control Kit – Give Your Throttle Arm A Break