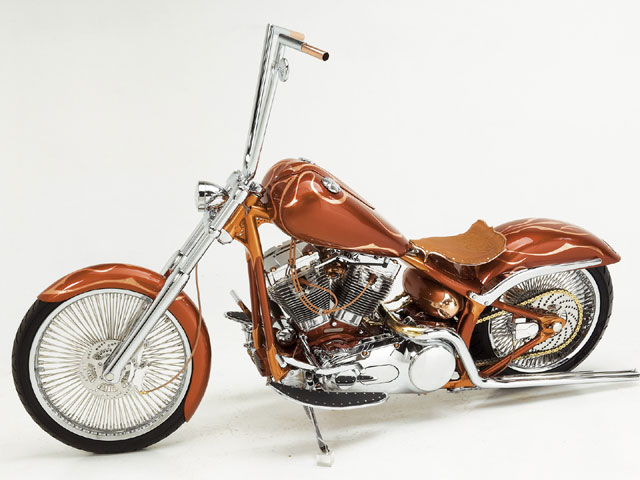 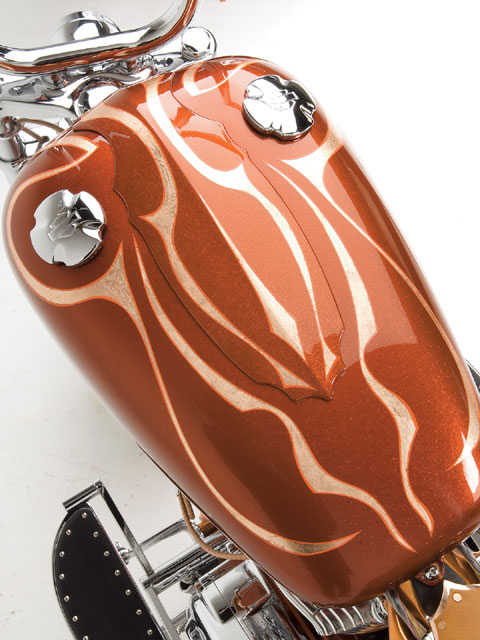 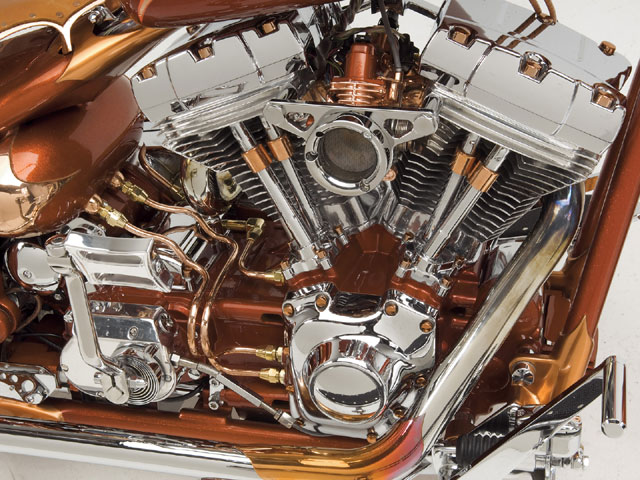 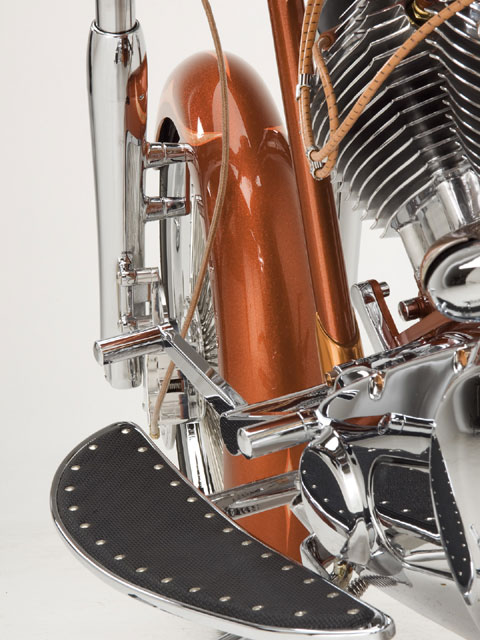 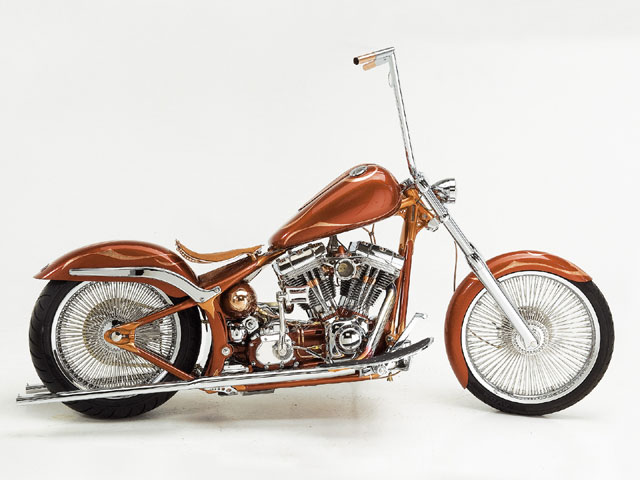 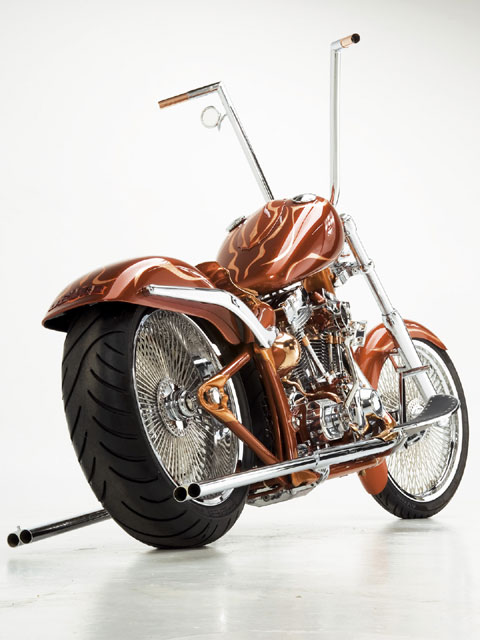 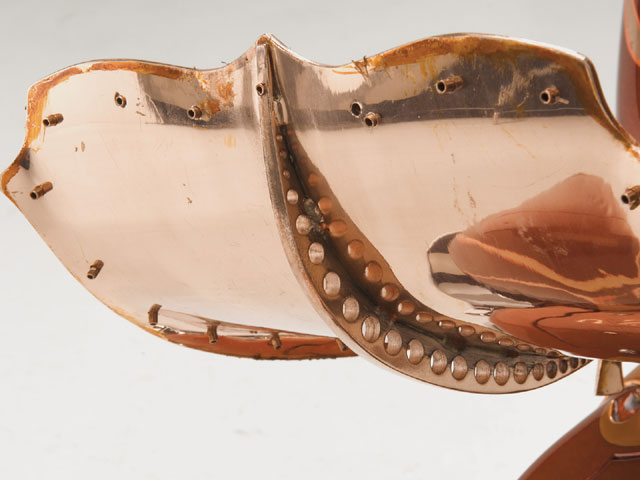 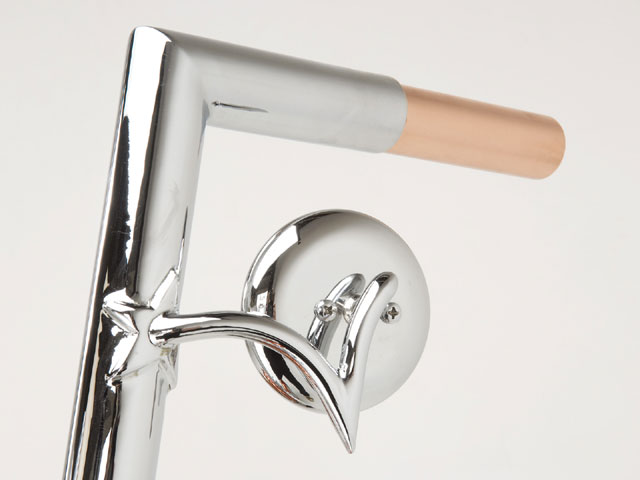 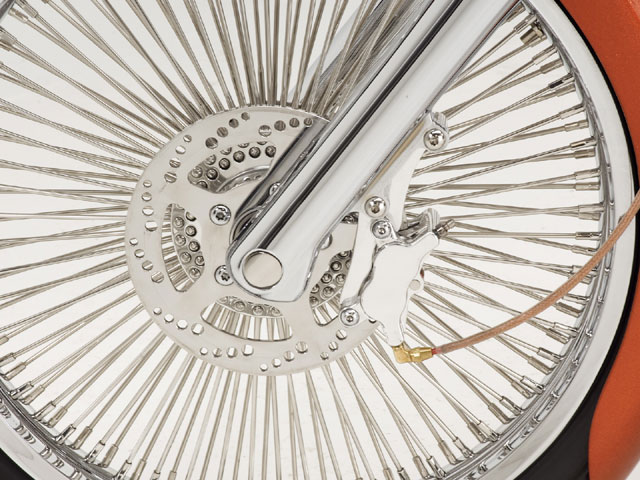 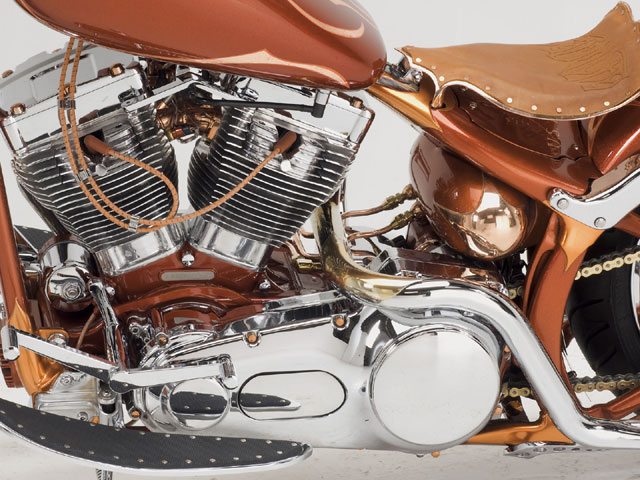 There’s a new vibe cruising out of the avenues and alleyways of California’s rich lowrider culture. From its origins in dropped and chopped Chevrolet Fleetlines to the front-to-back and side-to-side motion of Chevy Impalas, SoCal’s lo-lo phenomenon has spread from four wheels to two. Over the past several years, while the rest of the nation was fighting over the whole chopper/bobber b.s., a subculture of artists and craftsmen was quietly tolling away in shops and garages, utilizing H-Ds as a new canvas to express their skills, art, and love of the lowrider culture.

“My original vision for this bike was inspired by the handmade pistola in the movie The Mexican,” Charlie Montgomery, U.S. Kustoms owner and builder of this Kandy Tangerine custom Softail, told us. “We wanted to create something with the fine details that echoed this. We also wanted to honor the classically defined lowrider aesthetic.”

The bike was originally purchased in 2002 from McGuire’s H-D in Walnut Creek, CA, and Rafael Carmona was completely happy with the 40th birthday present his wife had gotten him. But within a year he was ready to start transforming the Softail Deuce. “I was looking for someone to cut out the word ‘Deuce’ in my rear fender,” Rafael said. “I wanted it to look very specific, though, like a car club plate you see in the back windshield. This polisher guy I knew pointed me in the direction of U.S. Kustoms in Concord, CA, and said Charlie was more than capable of getting the job done.”

With a childhood background of restoring a ’49 Chevy Fastback with his dad, as well as messing around with bikes since he was 14, Charlie learned the tools and tricks of the custom trade hard and early. But his love of being in the shop paid off, as he developed exceptional skills and an eye for detail.

Charlie did such a good job of cutting up the rear fender, dropping in the lighting, and then tightening up the front on Rafael’s Deuce that a year later Rafael was back for more-much more. At first it was just for some new bars and a paint job, but within a few weeks, Charlie had turned the bike into an almost completely new machine.

“Rafael was gracious enough to give us a lot of creative control. But we tried to keep the Deuce’s sheetmetal silhouette intact as much as possible, so it would still read as a Deuce,” Charlie said.

“A lot of creative control” is putting it lightly; Charlie basically had complete artistic license. In fact, the bike was a perfect candidate for Charlie to use one of the most important tools he learned in art school: dramatic tension. “It’s like Michelangelo’s fresco The Creation of Adam on the ceiling of the Sistine Chapel. When most people look at it, the first thing they notice is that the fingers of Adam and God are almost touching, but they don’t. Why not? That’s dramatic tension.”

Take a look at the seat. It’s like a sprung seat-but with no springs. There’s only about a half-inch between the seat and rear fender. So upon first look, everyone thinks that the seat is going to mess up the paint on the rear fender as soon as you sit on it. The pan is fixed on three separate forward mounting points to give the illusion that it’s just floating in the back, but it’s strong enough to support Rafael’s weight. For added rigidity, it has a spine running down the center, which helps keep the pan from flexing. Sure, it’s not of biblical proportions, but it still inspires dramatic tension.

“The idea behind the gussets was to mimic the early build style where frames were braised together, which gave them an ornate quality,” Charlie said.

“The idea behind the gussets was to mimic the early build style where frames were braised together, which gave them an ornate quality,” Charlie said.

However, instead of basically starting from scratch with a new frame, or tearing the existing frame apart to gusset it, Charlie sculpted some 1-1/2-inch round stock into gussets to fit at all the tube joints. The gussets were then cut in half and tigged back together to complete the look.

While I am personally not a fan of the stock Deuce sheetmetal, Charlie worked his magic to turn the gas tank and rear fender into much more appealing pieces. Since he was going to Frisco-mount the gas tank, exposing the ugly underside, Charlie reworked the tank so it would have a flat bottom and fabricated an access cover in place of the stock dash, so they would still be able to get to the fuel pump. The tank was then mounted with a Fat Katz flush-mount setup. At the backside the fender was shortened, then spliced down the center and rewelded so it was wider up front and tapered toward the rear. To help support the fender, a set of Ness fender struts was shortened and rounded.

The stock oil tank was ditched, and in its place Charlie welded up his own oil tank out of spun 16-gauge mild steel. The tank was actually made out of four identical bullet-shaped pieces. Two pieces were welded together to create the tank, while the other two pieces were cut into a star-shaped end cap. The stars were offset-welded to the ends of the oil tank. Charlie then went back and welded up the difference between the two surfaces; this technique gives the overall look of the oil tank more depth and definition. There are small details like this throughout the bike that keep admirers on their toes.

Getting back to the lowrider aspect of this Deuce, it wouldn’t properly represent West Coast style if it weren’t bagged to drag. Charlie has two patents on his Piggy Bagger air-ride setup that will pop the bike from dropped to ride height within one second. “I am fascinated by the kinetics of how things work. With my airbag system, I wanted it to pop up instantly. Just like lowriders want their cars to hop, that’s practically what this system does.” More lowrider influences include 120-spoke wheels (throw some gold on ’em, and you’d be rollin’ Daytons), and let’s not forget the candy paint and ol’-school flake.

Charlie designed the system with a pressure tank that is set up to compensate for Rafael’s weight; with the tap of one button, the rear bounces up, and you’re ready to go. If you’ve got a passenger, all you have to do is hold the button a little longer to add more air. The system is operated by one button mounted near the grip on the custom Z/ape-hanger bars. As an added safety feature to keep from accidentally dropping the rear while riding, the dump switch becomes inoperable at a predetermined speed.

The list of details that were put into this bike goes on and on, such as countersinking the bolts on the triple-trees, hand-bent copper hard lines, or modifying the Sharp Eye kicker to work with the hand clutch. Basically, the addition of the kicker setup made things so tight internally that it was nearly impossible to actuate the internal hand clutch. “We had to go in and machine the clutch ball ramp and make it longer and less steep by changing the leverage ratio- la the Mueller automotive setup,” Charlie said.

For the time being, Rafael has the bike running the show circuit. Unfortunately, he got off to a rocky start. His truck and trailer were stolen from the casino parking lot while he was debuting the bike at the Big Twin West show, and they later found his rig stripped and stranded in the middle of the desert. Things quickly turned around, though, as the bike took First Place in its class in both the ’07 SF Rod Custom and Motorcycle Show and the ’07 Arlen Ness Show, where it won Promoter’s Pick.

They say approximately 70 percent of a motorcycle’s stopping power comes from the front brake system. Well, maybe “they” must […]

Custom and Vintage V-Twins of the International Motorcycle Shows

The Progressive International Motorcycle Shows is the largest motorcycle show series in the world with stops in 11 cities. The […]

Visit the Exile Cycles website and you will find some really cool gift ideas; from a brushed stainless-steel hip flask […]

Checking In With Powerplant Motorcycles