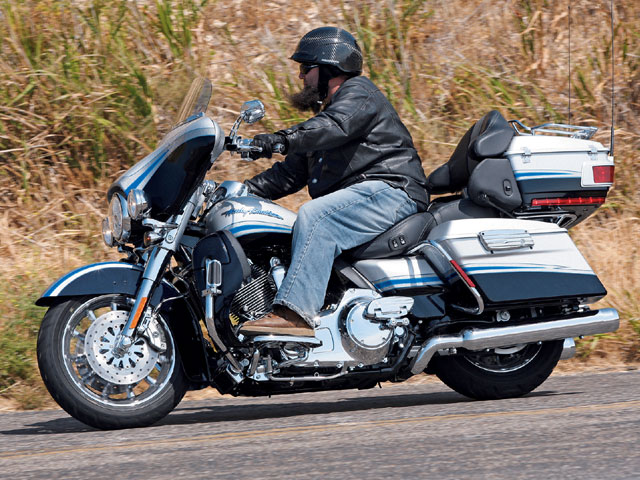 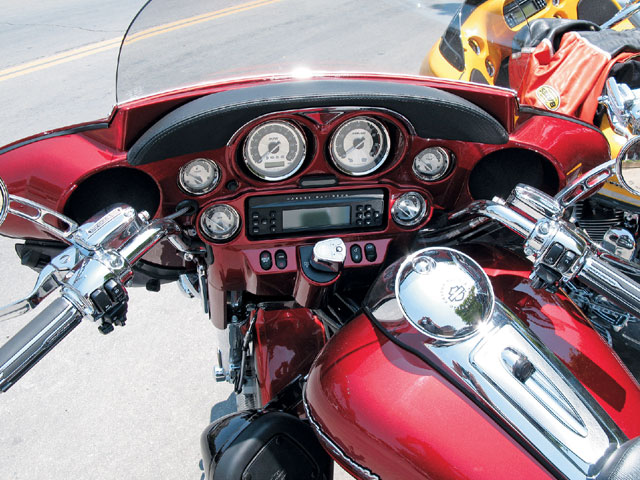 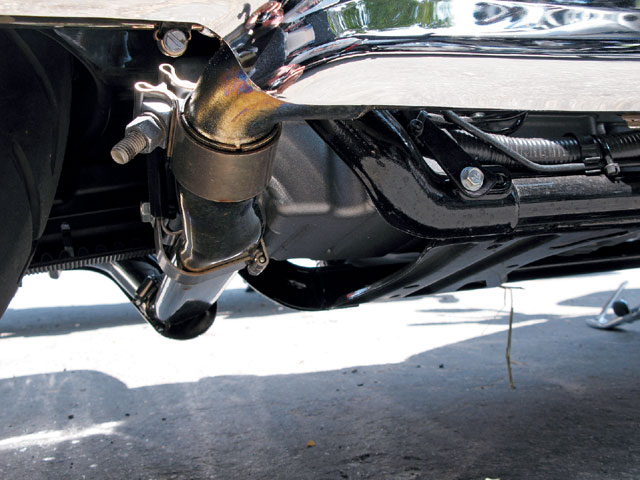 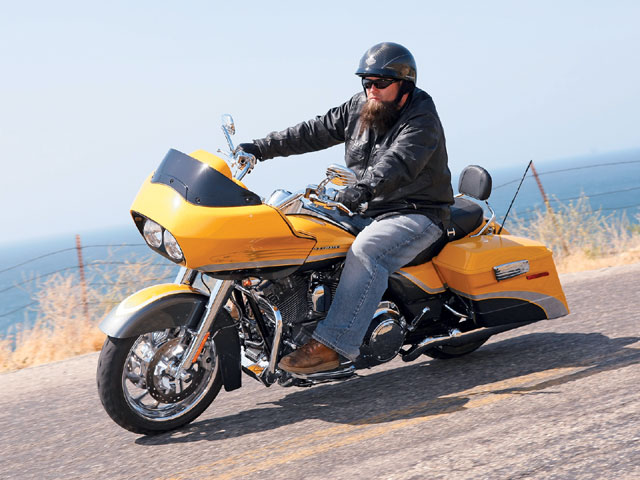 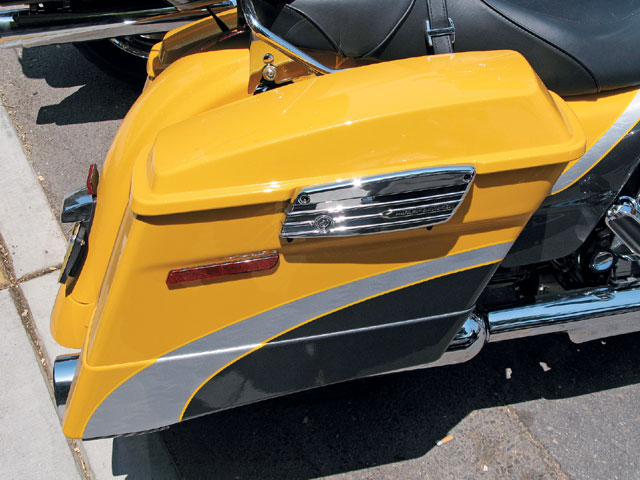 In addition to the new filler strips, Harley also added a set of saddlebag extensions to the bags of the CVO RG. The combination of the filler strips and saddlebags really gives the bike a truly custom and lowered look. 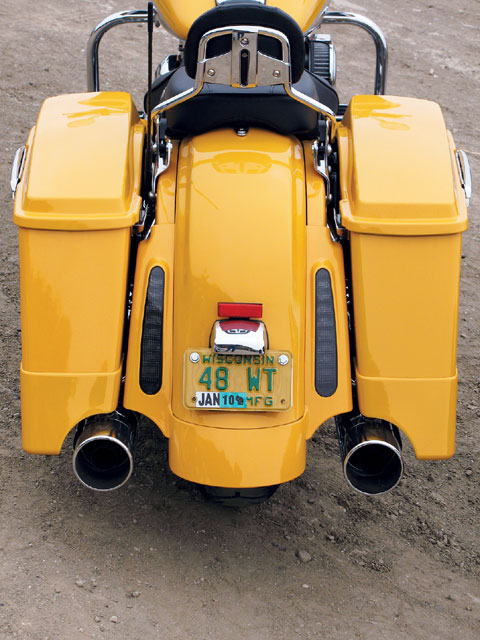 One of the coolest features of the CVO Road Glide is a new saddlebag filler strip with integrated stop, turn, and taillight LEDs. People love the bag filler look on the Street Glide, and Harley took that feedback and incorporated it into this new piece for the CVO RG. Another change on the CVO RG is the headlight assembly has lost its clear protective lens, and in its place are hardened headlight lenses highlighted by a blacked-out headlight trim. 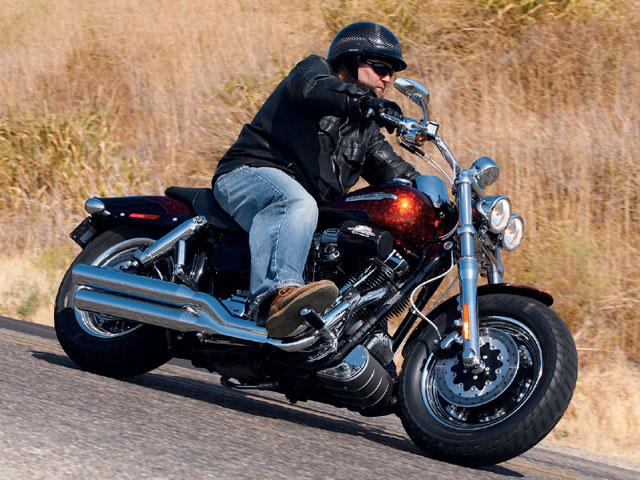 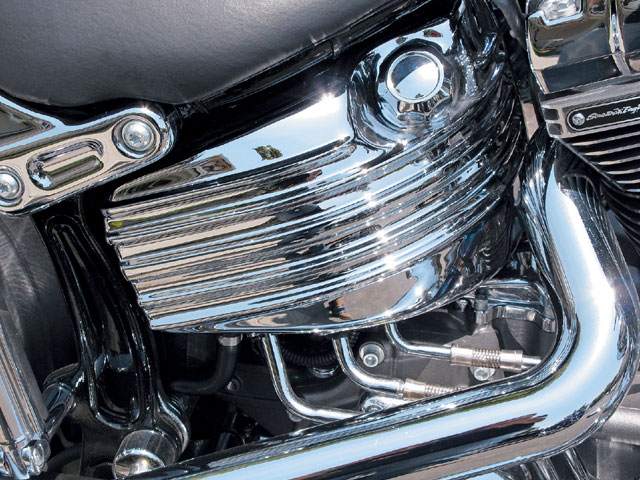 One component that was swiped from the Rocker parts bin and incorporated into the CVO Springer bin is the ribbed-style horseshoe oil tank. The chromed cast aluminum oil tank isn’t the only component to feature the bling factor; the swingarm was also dipped, along with a set of new 18-inch Road Winder wheels.

The new, wider, and louvered rear fender has a subtle upswept tip-a noticeable change from the more pronounced duckbill look of the traditional rear fender. The rear suspension has been retuned to give the bike a smoother ride, and the seat is quite exotic with contrast embroidered stitching and real buffalo inserts. Over the tank the bike features a full-length ribbed chrome console. Hopefully we’ll get our hands on one or a couple of these CVO models for full in-depth road tests in the near future.

The standout feature for the CVO Fat Bob is the new Fang cast wheels. The wheels are a combination of black powdercoated centers with mirror chrome rims. The “Fang” name comes from the chrome bolt-in inserts, which look like fangs attacking the wheels.

Other unique components on this model are the chrome blunt-cut mufflers, one-piece chrome riser with hidden wiring, two-piece chrome and color-matched console, and Alcantara and smooth leather seat with recessed chrome medallion.

Across the board for all the touring models (CVO and OE bikes), Harley has some major changes, such as a redesigned frame/swingarm and motor mount system, 180mm rear tire with Multi-Tread design, retuned suspension system, and new exhaust routing. The new frame features 50-percent fewer parts and an increased carrying capacity, and the swingarm is wider and longer. The biggest things we noticed from the overall changes to the frame and swingarm were the bikes were agile yet tracked in line from front to rear with very little feedback from the rear section. We’ll have more info on this when we report on the OE ’09 lineup in an upcoming issue.

This past June, we had the opportunity to head up the California coast to the beautiful town of Santa Barbara to check out Harley-Davidson’s ’09 Custom Vehicle Operations (CVO) models. If you’re not familiar with the CVO line, it’s basically the best of the best of what Harley has to offer. Rolling off the showroom floor with a CVO bike is like driving off the lot with a fully loaded Corvette; there isn’t much more you can do to “upgrade.” The bikes come chromed fender to fender, drenched in custom paint schemes, and packed with hopped-up motors.

Some of the benefits of owning a CVO bike are exclusivity (only a limited number of each model is produced), the bikes are outfitted with H-D’s latest technology and innovations, and in some cases these models are used to launch new P&A; collections. So what does that mean to the consumer? Unlike owning a black Road King, you will very rarely come across another person who has a bike like yours, and most likely your bike will sport parts and accessories that your friends won’t be able to get for their bikes for several months.

For ’09 the CVO program has four models available from three families: a Dyna, a Softail, and two touring bikes. While each model has its own unique appearance and characteristics, there are a couple commonalities between all the models. All the CVO bikes feature a Screamin’ Eagle 110ci Twin Cam engine with granite powdercoat and SE badging, a six-speed Cruise Drive transmission, and a heavy-duty self-adjusting hydraulic clutch.

The only thing better than getting to attend a press launch in Santa Barbara is getting to ride bikes along the glimmering coastline and rolling country hills. So let’s start with the biggest news from the launch. HB

The redesigned 2-1-2 exhaust system for all the touring models features a rear pipe that runs underneath the frame and exits the left side of the bike for that dual exhaust look. Under the frame the exhaust is tapered to provide extra clearance. The new design also redirects heat away from the rider and passenger and cleans up the area behind the rear cylinder/under the seat.

Limited to 3,000 units, U.S. MSRP $30,999**
We were very happy to see the Road Glide in this year’s CVO lineup. After logging many miles on our ’05 RG we know this bike like the back of our hand. However, once again the new frame, wide rear tire, and new tire composition really turn this bike into a whole new and improved animal. The short time we spent on this bike was amazing! If the OE version handles anything like this, then it may be time to upgrade. Some of the key components for this bike include chromed 18-inch forged aluminum Blade wheels, a slammed front fender, color-matched inner fairing, custom oil cooler with a chrome cover, and a low-profile seat with buffalo inserts.

Limited to 2,450 units, U.S. MSRP $25,999**
After its debut in the OE lineup last year, the Dyna Fat Bob was tapped to stop into the CVO Dept. for a slew of new paint, chrome, and P&A.; The first thing you notice about the CVO Dyna are the paint schemes, which are a mix between matte and gloss finishes, but even more noticeable is the leopard-print-like treatment added to the gas tank and fenders. In the chrome category the bike received front axle covers, wheel spacers, headlight mount, tank emblems, shock stud covers, and clutch and brake line clamps. With the beefed-up motor package, lowered chrome front forks, and retuned rear shocks, this bike really tears into the street, and with its chunky 130mm front and 180mm rear tires, this thing is ready to mow over anything in its path.

Limited to 2,500 units, U.S. MSRP $26,999**
Once again, Harley has decided to give the CVO treatment to a Softail Springer. The biggest change, however, for this year’s Springer is the addition of a meaty 240mm rear tire and new rear fender with louvered accents. The wider rear wheel/tire combination is definitely a departure from the 200mm found on last year’s model, which we were completely happy with. The new Springer rides nicely and has decent handling, but our initial response was we preferred the look and feel of the 200. With this 240mm rear, H-D is on the tail end of a hot trend from several years ago.

The updated Sportster version of the original Phantom Pipe for Softails and the Baffled FLH Phantom Pipe.

The switch is used for custom Sportsters and OEM stock replacements. The Fuggedaboutit Ignition Switch is fabricated to attach on […]