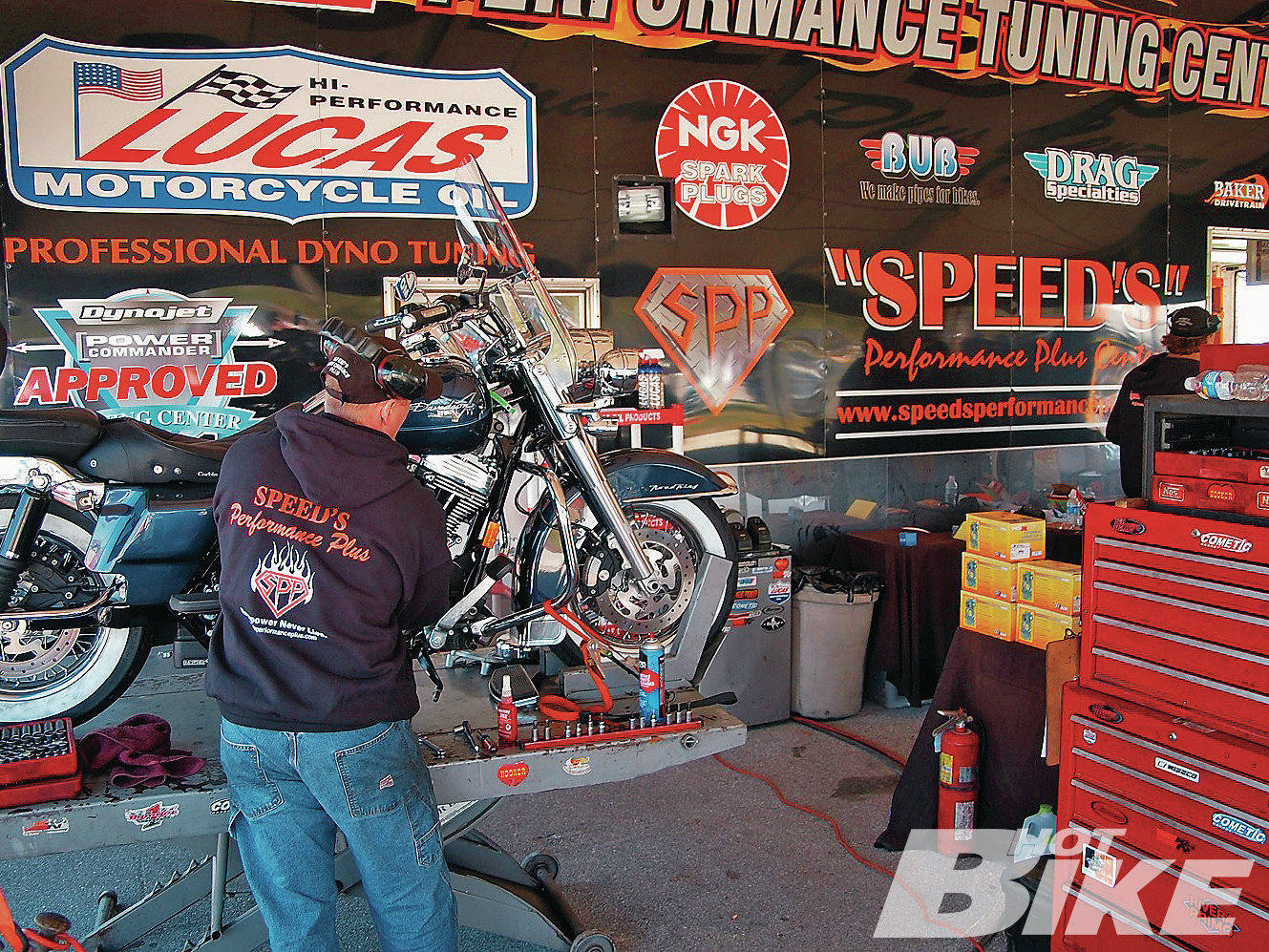 “The guys work on literally thousands of motorcycles a year.”

Chances are you’ve already seen, and probably heard of the guys from Speed’s Performance Plus (SPP). A full-blown motorcycle performance shop on wheels, Wayne Hanson and his family have taken their dyno-tuning/service/performance business on the road. From Daytona to Sturgis, Laughlin to Laconia, and all points between where H-D riders gather, for more than a decade SPP has been there. And in their wake they’ve left behind a long trail of sweet-running, hard-charging Harleys.

When it comes to performance-tuning Harley-Davidsons, Wayne Hanson and his sons Jason and Jamie along with family friend and master mechanic Arvid have seen it all and fixed it all. The guys work on literally thousands of motorcycles a year. With every damn combination of parts on them you can imagine, Wayne says. But if anyone can make those bikes run better and perform at their best, it’s this team. SPP has built up quite a reputation and with its honest, straightforward approach and loyal following.

All that’s coming to these pages. The SPP team will be sharing all its secrets, expertise, experience, and know-how. Starting next issue we’ll get to look over their shoulders and pick their brains as they address all the relevant issues of Harley-Davidson performance tuning. And all those tips, tricks, and suggestions for various parts combinations will be real-world modifications that matter the most to everyday riders. We don’t always use, or even recommend, a setup that might generate the biggest horsepower numbers on the dyno, Wayne says. What we’re after, and what most riders appreciate, is a tune that delivers the best response and performance from off-idle to about 4,500 rpm or thereabouts. For normal street riding, you want a bike that jumps when you twist the throttle and hit a gear, a bike that’s crisp, smooth, cool running, and reliable. We don’t mind taking a little horsepower off the top-end to gain torque where it counts.

And these days especially, the emphasis will be on value. Getting the biggest bang for the buck. Over the years and after tuning thousands of bikes, SPP has learned what combinations of carbs and throttle bodies, air and oil filters, pipes and slip-ons, and general tuning procedures and performance approaches work best to produce that tractable, all-around street performance riders want. Some of what they’ll be telling us might seem obvious, at least to longtime vets who’ve been in this game for a while, and some of it might be surprising.

Needless to say SPP has made a real specialty of tuning fuel-injected motorcycles and what they’ll have to say about tuning maps, tuning modules, throttle bodies, injectors, the electrical side of all this, and even fuel pressures, will certainly be instructive. But it won’t all just be fuel injection. Remember all those bikes tuned each season? Plenty of them have carburetors and SPP has lots to say about that, too. We’ll get the lowdown on what works best with those needle-and-jet fuel mixers, as well.

In either case, injected or carbureted, the vast majority of riders bringing their bikes to SPP are coming in with near-stock Harleys and they’re looking for crisp throttle response, smoother and cooler running bikes, and the kind of performance and boost low- and mid-range torque can deliver. And they want all that on a budget. No one wants to go through two or three sets of parts combinations to find the right setup. And these guys aren’t racers, Wayne goes on. They don’t need, and will never use, the kind of power found only at wide-open throttle. The SPP approachdo it once and do it rightmore than fulfills the need and that’s what we’ll be talking about.

Next time SPP is in your area, stop by. Take a look and have a chat. You can check their website, speedsperformanceplus.com, for the full 2011 tour schedule. But in the meantime stay right here because SPP is setting up shop right on these pages. It’s going to be interesting. HB

Time to saddle up. Courtesy of Corbin Seats Where else would you expect to find us but on Corbin’s Comfort […]