Three Two Choppers – Under The Radar 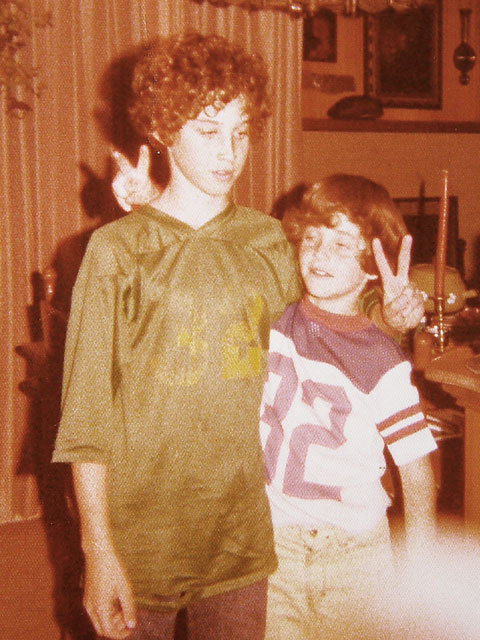 This pic was found three years after they named the shop. Notice their shirts? 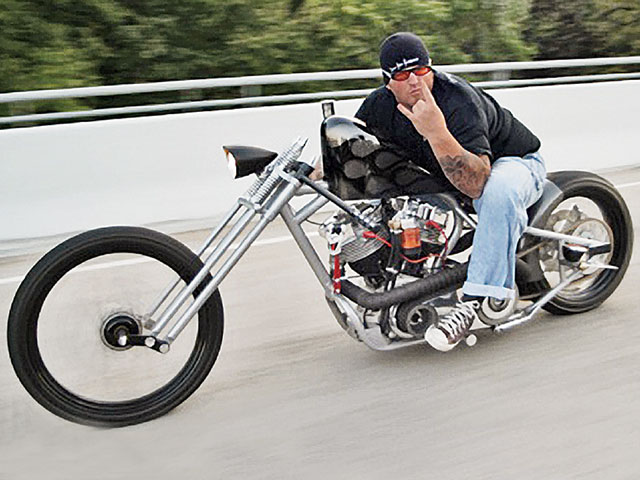 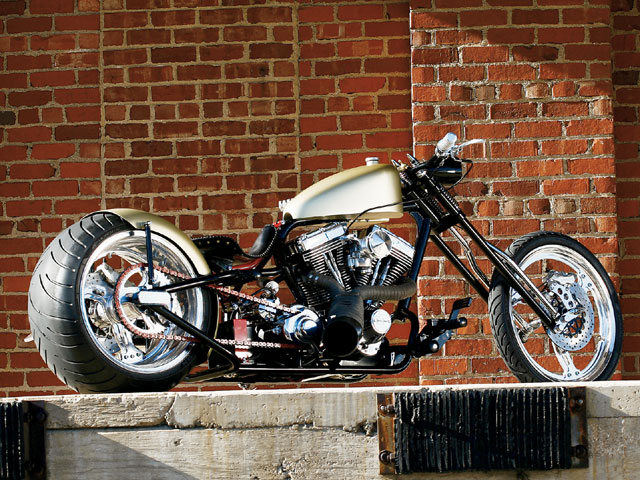 El Segundo IINotice the big, black pipe, which the brothers made out of tractor-trailer exhaust. 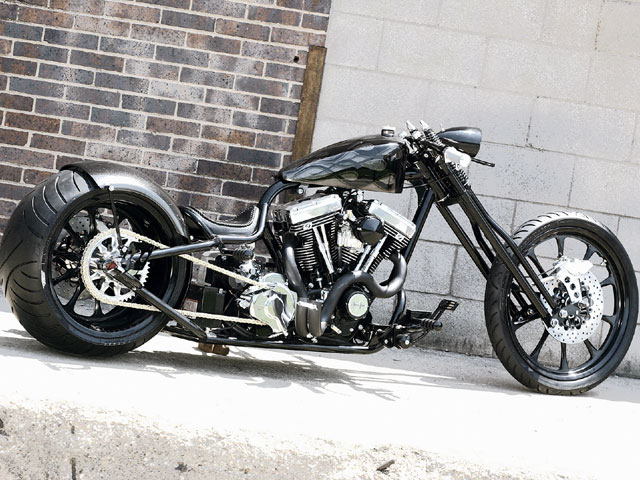 El Segundo IIILast but not least, number 3 (get it) of the El Segundos. 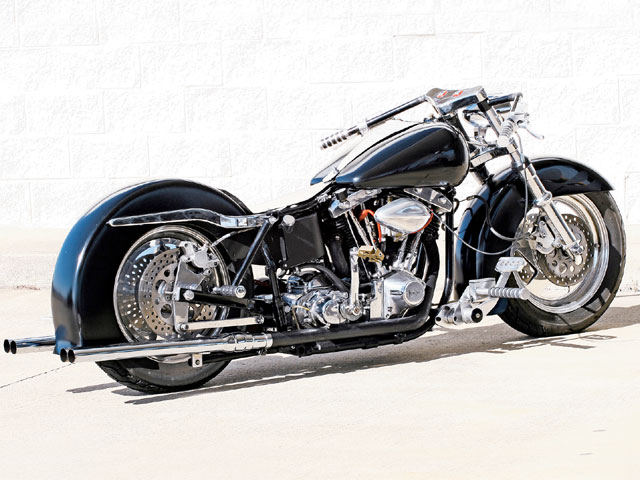 Here’s Jonathan’s own ride-the JC Bike-also the base of their entire style of motorcycles. Talk about low-it sits 2 inches off the ground. With a seat mounted right on the frame, the brothers thought it rode similar to a rigid, but was still comfortable. 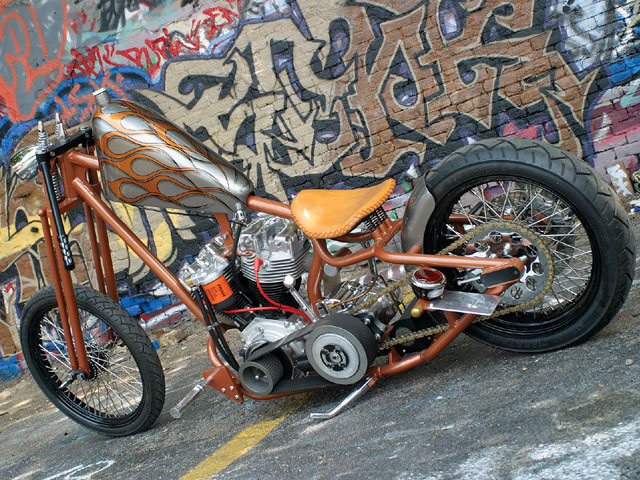 RufinoThe brothers built this bike when the industry was in the craze of low rides with stretched-out frontends and skinny back tires. 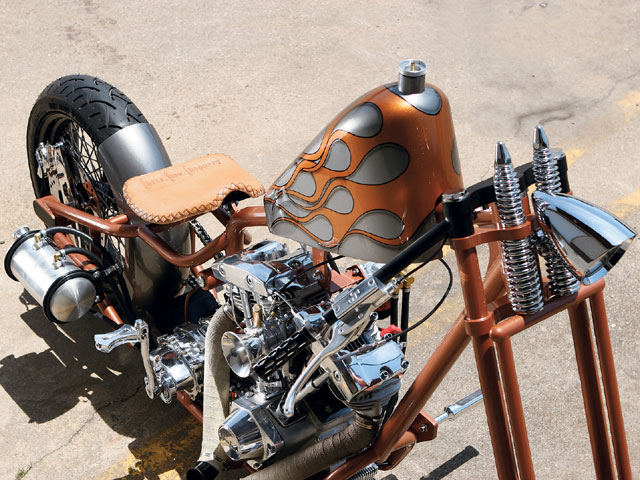 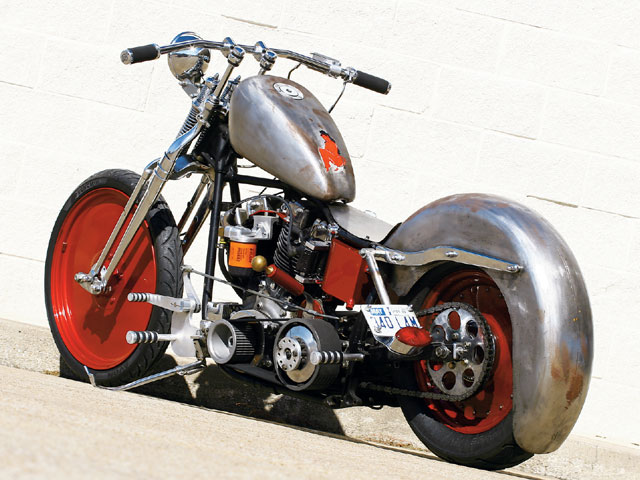 Here’s Jimmie Lee’s ’76 Electra Glide; the first and only Harley he has ever owned and still rides.

The VonUrple features one of their first radiused frames.

If the motorcycle industry is headed one way, you can bet Jimmie Lee and Jonathan Coen of Three Two Choppers are moving in the opposite direction of the latest bike-building trends. As owners of the Dallas-based shop, these brothers like to build bikes that go against the grain, take the risks in defining their own sense of style, and stick to it. “Contribute to the culture, don’t exploit it,” as seen on the opening page of their website, means the Coen brothers “will always try to add to the motorcycle industry with innovative designs and concepts, and never take advantage of the hard work of others.”

Jimmie Lee and Jonathan started building bikes almost 20 years ago after riding sport bikes and watching their buddies take spills. “After years of riding crotch rockets and seeing friends slide down South 14 Highway outside Albuquerque, New Mexico,” Jimmie Lee said, “I had an idea to buy a couple of fat, black, nasty, loud, oil-spitting Harleys. Then we found that we had opened our souls to what would prove to be a lifelong passion.” In the beginning of their wrenching careers, Jimmie Lee said, “Mentors like Joe Cox in Texas and Steve Hersh in California took us in and showed us the ins and outs of Harley-Davidsons.” The brothers always took the time to listen to these guys that came before them to learn as much as possible.

For the Coen brothers to head in their own direction, opposite the fads in the motorcycle industry, their initiative is due in part to keeping to their own sense of style and design and sticking to their roots. “I have been talking to my brother about influences,” Jimmie Lee said, “and we both think the biggest influence is more of our own drive to create bikes that stand the test of time, and not follow trends. We’re just a couple of guys who love building motorcycles and we decided to take a chance and build what we wanted to see in a cool custom bike.”

When it comes to their designs, the brothers believe in building bikes that will still look cool in the years to come. For instance, you may notice with most of their motorcycles that the oil bags are mounted outside the frame, and the jockey shifters are mounted low on the downtube to fit with the riding style of their bikes. With most of the parts being handmade, from the handlebars to the fuel tanks, they try to build bikes that are innovative, rideable, and timeless. In developing their “Tres Deuce” style, Jimmie Lee explained that it’s about adding to and contributing to the motorcycle industry, and not stealing each other’s ideas.

If you take a look at some of their bikes shown here, they practically scream the same style-similar gas tanks, and not real flashy paint. Take their “Huri” bike, which was the first motorcycle they built as a company. With its handlebars slammed down low and the oil tank outside the frame, it set the bar for the brothers’ “El Segundo” bikes. They all have Three Two’s own dropseat frame, side-mounted oil bags, low handlebars, and low seats so you sit more in the bike. In fact, this low style can best be seen in the “JC Bike”-it was the base of their entire style, and set the groundwork for their other motorcycles.

When asked about the shop name, Three Two Choppers, Jimmie Lee and Jonathan explained that the numbers three and two have always held some significance in their lives, and the numbers just seem to show up everywhere, any time. Take when Jimmie Lee was looking for a painter and was torn between two different people. He spoke to the first painter, then to the second one, and as the conversation progressed with the second person he gave Jimmie Lee his cell phone number. The numbers three and two were in his number twice, so the brothers had found their painter. “The numbers are everywhere in our lives, and they’ve become like a type of road marker for us,” Jimmie Lee said. So, from us here at HOT BIKE and in keeping with Three Two Choppers number tradition, we decided to give a three-page story to the two brothers. You can check out more of Three Two Choppers rides at www.threetwochoppers.com.

Whether it’s for a film SLR or DSLR, you need to be storing your camera in an appropriate bag. Photo: […]

1. Baker’s high quality, two-piece billet aluminum pan comes with everything you need to replace the stock pan. Included are […]