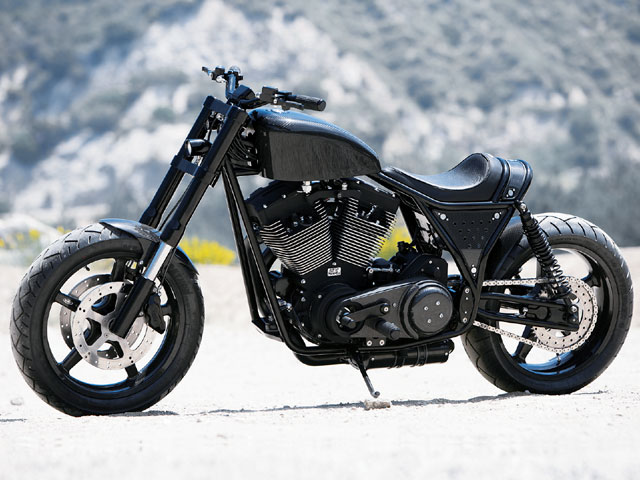 Russell Mitchell, owner of Exile Cycles, is a veteran of the bike-building world as well as the insanely popular Discovery Channel TV show Biker Build-Off (BBO). So far, Russ’ luck hasn’t prevailed in television-land, as he’s yet to take home a BBO victory when going up against the likes of Eddie Trotta, the Detroit Bros., Scottie Cox, and Joe Martin. Despite that track record, Exile has never been more popular with the general public and BBO producer Hugh King.

When the heavily tatted, mohawked gent from the UK was approached by Hugh for another chance at BBO success, Russell jumped right on board. Figuring there was no way he could win, he picked fan favorite Billy Lane as his opponent. As an extra challenge, this Build-Off would culminate in a 1,000-plus-mile ride from Chicago, IL, to Laconia Motorcycle Week in New Hamphsire. Practically accepting defeat before the build even started allowed the Exile crew to step outside the cube of their usual building style. They wanted to build a hooligan machine radically different from previous Exile bikes but still undeniably Exile, complete with their trademark minimalist aesthetic.

Over the past 10 years Exile has never built a bike with a rear swingarm, a Twin Cam motor, or a rubber-mounted mill. Russell remembers building some streetfighters back in the day-machines made to take care of business on the streets. With that in mind, he designed the Streetfighter RX-a stripped-down muscle bike with a supermotard flair-focusing on handling and speed. The guys at Exile wanted the bike to be as streetable as possible but still appear stripped down like their traditional offerings.

Because this bike would take the crew into uncharted territory, the timeline for the show was more stressful than the previous Build-Offs. At the heart of the project is the RX frame (with rubber mounts for motor-vibration isolation), which resembles the legendary, now-defunct H-D FXR. The rear of the strutless frame has a signature triangular section that easily distinguishes it from a Dyna frame and which cradles the modern Twin Cam mill. Behind the upper shockmounts at the rear of the triangle, the two sides of the frame have been continued over the tire in a loop that joins them. It’s hard not to notice the flow of the frame tubing from the lower part of the neck, through the downtube, into the framerail, up behind the transmission, then toward the shock mount, over the loop, and back again toward the other side of the neck. Combined with the 28-degree neck is a swingarm constructed from two sets of round tubing. The swingarm pivot has been raised for better and quicker handling characteristics. Suspension duties are handled by a set of Works Performance shocks in the rear and Exile 55mm inverted forks by Storz. The beefy tubes are held in place with a set of Exile triple-trees (in black, of course). Even sitting on the sidestand, this bike begs to be pushed hard.

Keeping with the theme of minimalist styling and high performance led the Exile team to save as much weight as possible on the Streetfighter. Copious amounts of carbon fiber (CF) were employed everywhere possible to meet this goal. Sticky Metzeler tires surround Exile’s own five-spoke CF wheels-an 18×3.5-inch shod with 150mm rubber up front and a 200mm skin on the rear attached to a 18×5.5-inch wheel. Matching dual Exile discs and four-piston calipers provide plenty of frontend stopping power, while the drive chain is connected to the rear wheel through a sprocket/brake-rotor combination, which is also clamped by an Exile caliper. The rear system cleans up the right side of the bike while shaving extra pounds. Actuation of the front brakes and clutch comes courtesy of blacked-out ISR aluminum hand controls, while an Exile midmount brake pedal pushes the juice for the rear brake.

For the long ride ahead, Russell chose a rubber-mounted JIMS 120-inch Twin Cam motor that gives plenty of usable power for this lightweight bike, along with relative comfort, since the rubber-mounted engine and transmission quell the vibrations reaching the rider. This race-bred motor was filled with JIMS and Screamin’ Eagle go-fast goodies. A small, round CF air-cleaner cover obscures the large 51mm CV carb. Custom two-into-one exhaust pipes capped with a Yoshimura canister carry out combustion waste. The under-the-frame placement is Buell-esque and keeps the weight distribution of the bike low for enhanced handling. By using an H-D FLH transmission, the oil tank is hidden away under the tranny, looking good, but also lowering the center of gravity of the bike. Highway manners benefit from the addition of a JIMS six-speed gearset.

Sheetmetal was kept to a minimum on this build, fitting the lines of the bike perfectly. A CF King Sportster-style gas tank was set low on the backbone of the frame. Small CF fenders don the front and rear and are barely elevated off the rolling stock. A trick mesh panel fills in the space behind the Bill Wall Leather seat, which covers the brake light and turn signals. When they’re not actuated, the lights are practically invisible. Speaking of lights, check out the unobtrusive Lazer Star lights nestled between the triple-trees and fork tubes. Mean and clean. Rounding out the package are 1-1/4-inch Exile FatBar handlebars with a lone Wire Pro electronic gauge sitting above the integral risers.

After a grueling 10 days to complete this bike, Exile pulled into Chicago in preparation for the 1,000-mile ride with Billy. When he arrived at Criminal Customs, the shop dog gave Russ a welcome bite to his foot. In the end the dog and gravity won out, as Russell hit the pavement while rolling at crawling speed. He broke his foot in two places, requiring an ER visit and a promise not to ride. Yeah, sure. Exile’s next stop was the sneaker store, where they purchased a size-16 basketball shoe that fit over the newly casted foot. To help keep the huge shoe on the footpeg, a plate was fabricated to screw into the bottom of the Nike.

The ride was on; nothing was going to stop Russell from riding into Laconia. Well, almost. Twenty miles short of the almost 1,100 miles, Billy’s gas tank developed a gas leak and burned to the ground right on the side of the highway. With that unfortunate event, Russ was awarded the BBO victory. It wasn’t exactly how he wanted it to go down, but the bike is more than he could have hoped for. This complete bike, one like it, or the parts to build your own are now offered by Exile.

Rest and Tour The touring-bike crowd has been asking for their own version of PM foot controls for years, and […]

Joker’s 7/8-inch bar clamp as shown. Courtesy of Joker Machine This dual top clamp from Joker is a universal piece […]